“I’ll Get You” is a B-side to the Beatles’ hit single, “She Loves You” from 1963. Of course, the single release was a very popular song around the world. In fact, it topped the charts in most countries where released.

Being a B-side to a Beatles’ single meant a lot of exposure, so, “I’ll Get You” became a popular song. Of course, the A-side, “She Loves You”, became one of the most recognisable songs from The Beatles catalogue. In fact, an announcement in 2009 from the BBC claimed that single was the biggest selling Beatles’ single of all time in the UK.

Therefore, it’s clear to see how both songs were so popular at the time. The song, “I’ll Get You”, never appeared on an album until 1988 when the “Past Masters” album hit the shops. The Fab Four would regularly sing the song as part of their live act, especially since Paul McCartney loved the song. Moreover, they even sung it on “Sunday Night at the London Palladium” in October, 1963.

What is noticeable about these both of these songs is the repetitive use of the word “Yeah”. Indeed, across Europe, The Beatles got the nickname of “The Yeah-Yeahs” because of the overuse of the word! 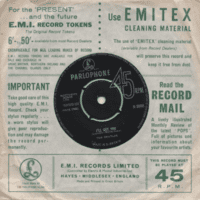 There is an abnormality within the song which is obviously noticeable once you hear it. In their early recording days, The Beatles could knock songs out pretty quickly. So, maybe this song glitch came about because of time restraints.

You can hear this after the line, “Well, there’s gonna be a time .” While McCartney sings, “When I’m gonna change your mind”, John Lennon sings, “When I’m gonna make you mine”. It’s not a serious fault because they do blend in reasonably well together. According to the sheet music, the correct version is what McCartney sang. But there is another mix up soon after that line.

The Beatles started to record “I’ll Get You” on the 1st July, 1963, during the 2.30pm-5.30pm and 7pm-10pm sessions. Since documentation doesn’t exist we can’t tell how many takes there was. But we do know the track had the working title of, “Get You In The End”.

Another point to note is that the original master tape is no longer available. It was standard practice at the Abbey Road Studios to record over the originals once the final mix took place, this was usually a mono mix. This was the case with “I’ll Get You”, therefore, the original recorded song is only available in mono.

On the 1995 album, “Anthology 1” there is the version from their performance on “Sunday Night at the London Palladium” from the 13th October, 1963.

Tagged Get You In The End, I’ll Get You, Song Glitch, Sunday Night at the London Palladium. Bookmark the permalink.