“I’m Down” is the B-side to the 1965 Beatles’ hit single, “Help!” Obviously the single was a number one chart record around the world. However, the song is available on a couple of Beatles’ albums as well.

Written by Paul McCartney but with credits going to Lennon-McCartney, “I’m Down” is one of the heaviest rock songs in The Beatles’ catalogue.

In their early days the Fab Four would often cover rock and roll songs from American artists such as Chuck Berry and Little Richard. Of course, they would put their own slant on things. 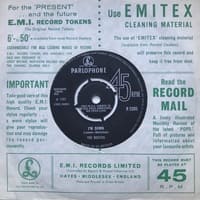 Moreover, this was 1965 and The Beatles come a long way in their evolution.

“I could do Little Richard’s voice, which is a wild, hoarse, screaming thing, it’s like an out-of-body experience. You have to leave your current sensibilities and go about a foot above your head to sing it. You have to actually go outside yourself… A lot of people were fans of Little Richard so I used to sing his stuff but there came a point when I wanted one of my own, so I wrote I’m Down.”

The Beatles would often close their concerts with “Long Tall Sally” which was a Little Richard composition, but in their final year of touring they would use “I’m Down”. These songs put enormous strain on the vocal cords obviously. It’s not surprising then that they would sing these songs last.

“I’m Down was my rock ‘n’ roll shouter. I ended up doing it at Shea Stadium. It worked very well for those kind of places, it was a good stage song, and in as much as they are hard to write, I’m proud of it. Those kind of songs with hardly any melody, rock ‘n’ roll songs, are much harder to write than ballads, because there’s nothing to them.”

On the 15th August, 1965, while The Beatles were on tour in America, they played in front of their largest audience ever. This was at the Shea Stadium in New York City with 55,600 screaming Beatles’ fans in attendance. When they closed the concert with “I’m Down” it is arguably the most memorable live performance of any individual song because of the way the band and audience enjoyed themselves.

By now the crowd was in a frenzy and The Fab Four, full of adrenalin at this point, gave it all they had in them. With Ringo Starr beating away at his drum kit in his usual lively fashion and Paul McCartney screaming away in enthusiastic youthfulness, the show was coming to a climax.

While John Lennon played his Vox Continental combo organ, sometimes with his elbow, both he and George Harrison couldn’t control their laughter. This performance is available on their Anthology DVD collection.

“I was putting my foot on it and George couldn’t play for laughing. I was doing it for a laugh. The kids didn’t know what I was doing.

Because I did the organ on I’m Down, I decided to play it on stage for the first time. I didn’t really know what to do, because I felt naked without a guitar, so I was doing all Jerry Lee – I was jumping about and I only played about two bars of it.”

The Beatles began recording “I’m Down” on the 14th June, 1965, in Studio Two at the EMI Studios, London during the 2.30pm-5.30pm session. They recorded 7 takes that day when they also recorded “I’ve Just Seen A Face” and “Yesterday” although the latter being only performed by McCartney himself.

Of the 7 takes, the last one was suitable for the master rhythm track ready for overdubbing while take 1 without the loud organ and backing vocals appears on their 1996 album, “Anthology 2”. The master was not on any of the band’s original albums but it became the B-side of the 1965 single, Help! However, it later appeared after “Yes It Is” on the 1988 album, “Past Masters”.

During the recording sessions McCartney repeats the phrase “Plastic soul, man, plastic soul” which is what black musicians would use to describe Mick Jagger. The Fab Four later adapted this phrase for the title of their 1965 album, “Rubber Soul”.