In Spite Of All The Danger

To begin with, “In Spite Of All The Danger” is a song by The Quarrymen. This, together with its flip side, “That’ll Be The Day“, are recordings which are significant in the history of music. This is because they are the first ever recordings** of The Quarrymen. Basically, this is The Beatles before they had a name change.

** Because this single was not for commercial purposes, The Beatles first single in that sense is, “My Bonnie“.

** This is the one and only time they have a credit together as a writing duo, of course! 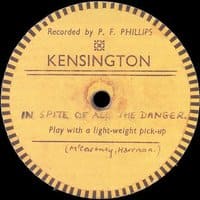 In Spite Of All The Danger

The song is a McCartney-Harrison composition and therefore this has a double significance. Indeed, it is the only Beatles’ song with this duo as the songwriters. Be that as it may, the song appears on The Beatles’ 1995 album, “Anthology 1” for us all to enjoy. With this recording going back to 1958, then obviously Ringo Starr is not the drummer.

“It says on the label that it was me and George but I think it was actually written by me, and George played the guitar solo! We were mates and nobody was into copyrights and publishing, nobody understood – we actually used to think when we came down to London that songs belonged to everyone.

I’ve said this a few times but it’s true, we really thought they just were in the air, and that you couldn’t actually own one. So you can imagine the publishers saw us coming! ‘Welcome boys, sit down. That’s what you think, is it?’ So that’s what we used to do in those days – and because George did the solo we figured that he ‘wrote’ the solo.”

Having established that he actually wrote the song, McCartney continues.

“It’s very similar to an Elvis song. It’s me doing an Elvis, but I’m a bit loathe to say which! I know which one! It was one that I’d heard at scout camp when I was younger and I’d loved it. And when I came to write the first couple of songs at the age of about 14 that was one of them.”

In brief, the recording took place in the home of Percy F Phillips at 38 Kensington, Liverpool. Here, Phillips had a mini-recording studio where he made a single 78rpm 10-inch shellac disc from their tape recording.

“I remember we all went down on the bus with our instruments – amps and guitars – and the drummer went separately. We waited in the little waiting room outside while somebody else made their demo and then it was our turn. We just went in the room, hardly saw the fella because he was next door in a little control booth. ‘OK, what are you going to do?’ We ran through it very quickly, quarter of an hour, and it was all over.”

The disc cost 17 shillings and threepence but the band only had 15 shillings. So, they had to go back when they made up the shortfall.

Once the band members had the master acetate disc, each one would keep it for a week and then pass it on. However, they must have forgotten about is somewhere along the line. This is because John “Duff” Lowe had it in his possession for 23 years!

In 1981, Paul McCartney heard that Lowe had the original disc valued at auctioneers, Sotheby’s. McCartney then got in touch with Lowe in an attempt to buy it privately instead.

“Before midday on that Sunday Paul McCartney had called my mum in Liverpool, I eventually spoke to him on the phone and we had long conversations over the next few days because he wanted to buy it from me. I was living in Worcester at the time and he sent his solicitor and his business manager up.

I deposited the disc in a small briefcase at the local Barclay’s Bank and we met up in a small room the bank kindly let me use. The deal was done, I handed the record over and we all went home.”

We may never know how much McCartney paid for the original disc but we do know that Lowe rejected the first offer of £5,000. Be that as it may, the deal went through in the end. McCartney soon had experts on the job of restoring the original sound.

With the restoration work complete, he made around 50 copies to give away to family and friends. The original disc is now the most valuable record on earth with the copies coming second.

Tagged In Spite Of All The Danger, Most valuable record on earth. Bookmark the permalink.