The Beatles released a single in Germany called, “Komm, Gib Mir Deine Hand” together with the B-side “Sie liebt dich“. Indeed, this single from 1964 translates into “Come, Give Me Your Hand” and “She Loves You” respectfully. Obviously, the A-side is the German version of “I Want to Hold Your Hand“. This German single was also a single release in Australia too. Be that as it may, both tracks are available on their “Past Masters” album now. 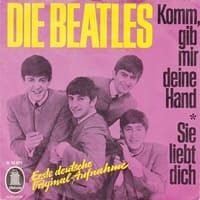 The Beatles reluctantly agreed to making a couple of songs in the German language due to a little encouragement from George Martin. Odeon Records, the German sub-label of EMI, told both Martin and manager Brian Epstein that by doing so they would sell more records.

Before recording the songs, they had to get a translation of them first. Camillo Felgen from Luxembourg had the honour of doing that. He was a singer, lyricist and television/radio presenter, but, The Beatles needed help to pronounce the words and phrases as well. So, while The Beatles were on a 19 day visit to France, Felgen was to meet up with the band and start teaching them the correct pronunciation.

The Beatles cancelled the original date of the 27th January, 1963 due to their original doubts. However, after complying with George Martin’s pleas, they began recording two German Language songs at EMI’s Pathé Marconi Studios in Paris on the 29th January, with “Komm, gib mir deine Hand” being the first. The other being “Sie liebt dich”, of course.

Using the original rhythm track from the song’s original recording (17th October, 1963), they were able to overdub their new German language version. They could not do this for “Sie liebt dich” because there is only a mono version of “She Loves You” available. Therefore, the German version “She Loves You” is a completely new recording.

While The Beatles were on tour in Australia, they released “Komm, gib mir deine Hand” with “Sie liebt dich” by “Die Beatles” as a single on 21st June, 1964. However, it was the only Beatles’ single not to chart down under.

On the 1988 album, “Past Masters”, both songs are the original German recordings.