“Lady Madonna” is one of those instantly recognisable Beatles’ recordings, of course. This song was the A-side of a single release from 1968 with the B-side being, “The Inner Light”. However, later it appeared on a few Beatles’ albums.

7″ Single
Past Masters
Anthology 2
1 (One)
Love

Written mostly by Paul McCartney but credited to the successful songwriting partnership of Lennon-McCartney, this song was a “back to basics” approach by the band.

After the past couple of years recording some groundbreaking psychedelic songs, this rock ‘n’ roll/R&B/boogie-woogie number was a breath of fresh air. That is not to say that period was bad, on the contrary, but it was time to move on. After all, we saw The Beatles go through various stages in the past. Remember, the White Album era was just around the corner!

Another era was beginning to open up also. “Lady Madonna” was the last of the band’s releases on the Parlophone label. All releases from now on would be on the band’s own label, “Apple Records”. However, that didn’t stop Parlophone from releasing the back catalogue. In America, this applies to the “Capitol” record label. 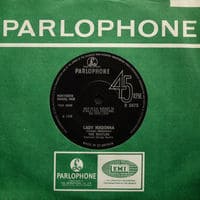 The piano part, which is the dominant feature of the song, is based around Humphrey Lyttelton’s trad jazz rendition of “Bad Penny Blues”. With John Lennon lending a hand with the lyrics, the song brings up an image of an overworked, exhausted mother coping with problem after problem.

“The original concept was the Virgin Mary but it quickly became symbolic of every woman; the Madonna image but as applied to ordinary working class woman. It’s really a tribute to the mother figure, it’s a tribute to women. Your Mother Should Know is another.

I think women are very strong, they put up with a lot of shit, they put up with the pain of having a child, of raising it, cooking for it, they are basically skivvies a lot of their lives, so I always want to pay a tribute to them.”

The song acknowledges every day of the week except Saturday but he only realised this years later:

Speaking many years later, McCartney appears to have taken inspiration from an article in the National Geographic Magazine. Accompanying the article was a photograph with the title, “Mountain Madonna”.

“One particular issue I saw in the Sixties had a woman, and she looked very proud and she had a baby. And I saw that as a kind of Madonna thing, mother and child, and I just… You know, sometimes you see pictures of mothers and you go, ‘She’s a good mother.’ You could just tell there’s a bond and it just affected me, that photo. And so I was inspired to write Lady Madonna, my song, from that photo.”

The Beatles began recording “Lady Madonna” on the 3rd February, 1968, in Studio Three at the EMI Studios, London, during the 2.30pm-1.30am session. They recorded three takes with take three being suitable as the rhythm track for overdubbing etc.

Returning to the song on the 6th February, final tweaks and overdubbing took place. They added vocals, backing vocals, handclaps and a saxophone solo from Ronnie Scott, but you hardly hear this in the final mix.

The version on their 1996 album, “Anthology 2” is a mix which contains bits from takes three, four and five with more of Ronnie Scott’s saxophone.

In 2006 we see the emergence of a new Beatles’ album called, “Love” which also has “Lady Madonna” on it. This has the percussion intro from “Why Don’t We Do It in the Road?“, the guitar riff from “Hey Bulldog“, Eric Clapton’s guitar solo from “While My Guitar Gently Weeps” and Billy Preston’s organ solo from “I Want You (She’s So Heavy)“. Then we get the piano from “Ob-La-Di, Ob-La-Da“.

“Lady Madonna” became a worldwide chart hit making number one in the UK, Australia and New Zealand as well as some European countries. However, it only peaked at number 4 in America.