The song, “Let It Be”, is the last single release by The Beatles while they sang together as a band in 1970. There were other single re-releases by The Beatles, but we had to wait until 1995 for new material from the Fab Four. This was “Free As A Bird“, of course.

There was also a separate album version and documentary film by the same name as well. Be that as it may, the single release was a number one record around the world.

After their manager, Brian Epstein, died in in the 27th August, 1967, The Beatles lost a little direction. While Paul McCartney was desperate to keep it all together, he found it difficult to motivate his bandmates at times.

The idea for the song, “Let It Be” came about during the 1968 sessions for the “White Album“.

“One night during this tense time I had a dream I saw my mum [Mary], who’d been dead 10 years or so. And it was so great to see her because that’s a wonderful thing about dreams: you actually are reunited with that person for a second; there they are and you appear to both be physically together again. It was so wonderful for me and she was very reassuring.

In the dream she said, ‘It’ll be all right.’ I’m not sure if she used the words ‘Let it be’ but that was the gist of her advice, it was, ‘Don’t worry too much, it will turn out OK.’ It was such a sweet dream I woke up thinking, Oh, it was really great to visit with her again. I felt very blessed to have that dream. So that got me writing the song Let It Be. I literally started off ‘Mother Mary’, which was her name, ‘When I find myself in times of trouble’, which I certainly found myself in. The song was based on that dream.” 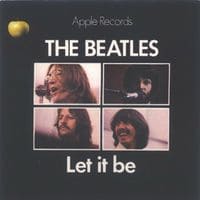 After The Beatles broke up in 1970, the band members went their separate ways and they said many blunt things:

The Beatles recorded two versions of the song, “Let It Be”, and they are both available on various albums too. Therefore, it might be wise to become familiar with them.

Obviously, there were many takes over this turbulent period prior to The Beatles breaking up. The various tracks also had many vocals, guitar solos, piano pieces and a mixture of other instruments. With all this to choose from, the production teams had a lot of material to work with. So let’s take a basic look at the different versions.

When they released the single version, the images on the sleeve were the same as those from the album of the same name. However, both versions differ greatly.

The difference on the album version came about when Phil Spector became involved with producing the “Let It Be” album. As we know, neither Paul McCartney nor George Martin was happy about this arrangement. He remixed the album version on the 26th March, 1970.

While George Martin lowered the orchestration for the single, Phil Spector raised this sound. It also features Harrison’s second guitar solo overdub, fewer backing vocals and a delay effect on Starr’s hi-hat. The final chorus differs as well with “there will be an answer” being repeated twice in contrast to once only on the single.

Of course, Phil Spector is famous for his “Wall Of Sound”. Be that as it may, many people reject the interference form Phil Spector.

Obviously we have the first commercial releases from 1970 but there are other alternative releases too. For instance, on the 1996 album, “Anthology 3”, there is the “take 1” version from the 25th January, 1969, recorded in the Apple Studio. This includes John Lennon’s inquisitive speech at the beginning, “Are we supposed to giddle [giggle] in the solo?”.

Obviously there are other differences. As well as the opening speech, we hear Lennon at the end say, “I think that was rather grand. I’d take one home with me”. Again, this is just the famous Beatles’ humour!

In 2003, when Paul McCartney looked at the Let It Be/Get Back project again, there was another release of the song. They removed Phil Spector’s echo as well as the maracas and tom tom overdubs. They also raised the profile of Billy Preston’s Lowrey organ towards the end of the song too. Together with tweaks to the guitar sounds, the result is striking!

Since we are highlighting the single release of the song “Let It Be”, we need to chart its success. The song hit the number one position in Australia and New Zealand, two countries that absolutely adored The Beatles so this wasn’t surprising. However, in the UK, the single only managed to get to the number 2 slot. This is possibly because the album sold so well!

In America, Canada and a few European countries, the song also went to number 1. Of course, many people wanted to get their hands on The Beatles’ last single.

Meanwhile, behind the Iron Curtain in the Soviet Union, the “Let It Be” EP (1972 Melodiya) was the Beatles’ first release there. That historic EP included the songs, “Across The Universe” and “I Me Mine“.

Tagged Bridge Over Troubled Water, Hi-hat, Let It Be, Let It Be Record, Let It Be Single, Let It Be Song, Linda McCartney, Lowrey organ, Mother Mary, Soviet Union. Bookmark the permalink.