“Love Me Do” was the first single release from The Beatles in the UK, of course. It didn’t make number one in the UK, but it did in some other countries. For example, it was a number one record in Australia, New Zealand and America. With this in mind, it qualifies for the 1 (One) album. However, the song appears on many other Beatles’ albums.

American single, Please Please Me, and compilation albums including 1 (One)

This was one of the earliest compositions from the prolific songwriters dating back to around 1958.

“Love Me Do is Paul’s song. He wrote it when he was a teenager. Let me think. I might have helped on the middle eight, but I couldn’t swear to it. I do know he had the song around, in Hamburg, even, way, way before we were songwriters.” 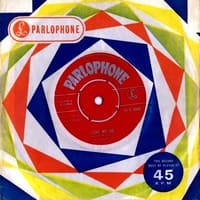 “Love Me Do was completely co-written. It might have been my original idea but some of them really were 50-50s, and I think that one was. It was just Lennon and McCartney sitting down without either of us having a particularly original idea.

We loved doing it, it was a very interesting thing to try and learn to do, to become songwriters. I think why we eventually got so strong was we wrote so much through our formative period. Love Me Do was our first hit, which ironically is one of the two songs that we control, because when we first signed to EMI they had a publishing company called Ardmore and Beechwood which took the two songs, Love Me Do and PS I Love You, and in doing a deal somewhere along the way we were able to get them back.”

As we know, The Beatles, just like other budding artists would sing many cover versions from established artists. However, the songwriting partnership of Lennon and McCartney would develop soon enough. At first through, they were not confident enough to introduce their songs into their live repertoire:

“Introducing our own numbers started round Liverpool and Hamburg. Love Me Do, one of the first ones we wrote, Paul started when he must have been about 15. It was the first one we dared to do of our own. This was quite a traumatic thing because we were doing such great numbers of other people’s, of Ray Charles and [Little] Richard and all of them.

It was quite hard to come in singing Love Me Do. We thought our numbers were a bit wet. But we gradually broke that down and decided to try them.”

In their early days, the band would jot down their songs in a school book. Furthermore, at the top of the page they would write “Another Lennon-McCartney Original” .

John Lennon’s harmonica playing on Beatles’ songs is legendary, of course. Therefore, it is fitting that he was to play his mouth organ on their first single release. In fact, the song starts with his harmonica playing. Moreover, the song has his bluesy harmonica solo break just over half-way through the song.

As well as the prominent harmonica which dominates throughout the song, we get our first glimpse of the fine vocal harmonies that would help project the band to stardom.

The Beatles were in their infancy and still learning the trade when they sang “Love Me Do”. As such, there are three variations because of the situation regarding the drummer. Obviously we think of The Beatles’ drummer as being Ringo Starr. But, the first three recordings had three different drummers, the other two being Pete Best and Andy White.

The first recording of “Love Me Do” had Pete Best on the drums for their audition at the EMI Studios in London on the 6th June, 1962. This version is available on the 1995 album, “Anthology 1”.

When Pete Best left the band and Ringo Starr became the recognised drummer, they recorded the song again on the 4th September. They recorded 15 takes before they had something suitable for a commercial release. This version became the single release but is also on the Past Masters album from 1988.

George Martin had some doubts about Ringo Starr’s drumming ability and so he brought in session drummer, Andy White for further recording on the 11th September. Ringo Starr then took the role of tambourine player for these recordings. This version appears on the “Please Please Me” album.

Since a tambourine doesn’t feature on the recording from the 4th September, it is easy to distinguish between the two. Be that as it may, this song has three different drummers and all are commercially available. Obviously it just comes down to individual preference when playing back.

During the early 1960’s The Beatles featured heavily on shows for BBC Radio and would record many songs for them. By now though, Ringo Starr was the only Beatles’ drummer. Together, they recorded “Love Me Do” eight times for various BBC Radio programmes between October, 1962, and October, 1963.

Those radio shows included, Here We Go, Talent Spot, Saturday Club, Side By Side, Pop Go The Beatles and Easy Beat. The version that is commercially available on their 1994 album, “Live at the BBC”, is the one from the “Pop Go The Beatles” aired on the 23rd July, 1963 which they recorded on the 10th July.

Just to point out that they also recorded the song during the Get Back/Let It Be sessions in 1969 and is available on bootlegs. That song doesn’t have any of Lennon’s harmonica playing but Paul McCartney singing in the same vocal style he used for “Lady Madonna“.

“Love Me Do” reached number 17 in the British charts although it got to number one in Australia, New Zealand and America. Indeed, The Beatles come of age and were always going to make it big after this song.

The only problem being that there is only the mono version available due to studio practices at the time. Once a record became a final mix (usually mono), they destroyed the other tracks. This was one of the two singles to suffer that way making a total of four songs only available in mono. The others are, “P.S. I Love You” (the B-side), “She Loves You“, and “I’ll Get You“.

There are fake stereo versions around, but again, that comes down to which you prefer.

Although The Beatles released “My Bonnie” earlier, that was with Tony Sheridan and the Fab Four were just the backing group. Not only that, but Ringo Starr was not yet a band member. In this case, Pete Best was the drummer. So, that might have been their first commercial single, but “Love Me Do” is their first single in the conventional sense.

Tagged Bluesy harmonica, Easy Beat, Harmonica solo, Here We Go, Love Me Do, Side By Side, Talent Spot. Bookmark the permalink.