The Beatles first commercial single** was “My Bonnie” (October, 1961, in Germany). However, this was in the early development stages of the band. So, at the time of release in Germany, The Beatles going by the name of The Beat Brothers and were a backing group to Tony Sheridan. Hence, the credits for “My Bonnie” go to Tony Sheridan and The Beat Brothers.

However, when Brian Epstein secured the British release on the 5th January, 1962, credits went to Tony Sheridan and the Beatles. The B-side to this song is, “The Saints“.

** Just to point out that The Beatles did record a disc previously, but that was not for commercial purposes. This was, “That’ll Be The Day“, of course. 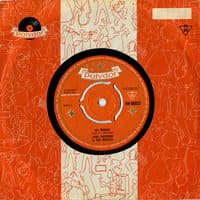 ** Ringo Starr was not a Beatles member at this time, of course.

In the early 1960’s, The Beatles (aka The Beat Brothers) were regular performers at the Top Ten club in Hamburg while supporting Tony Sheridan. Obviously they were soon to catch the eye of talent spotters. Producer, Bert Kaempfert, first spotted Tony Sheridan and The Beat Brothers. He signed them up to his company which would see Sheridan and the band record a number of songs together.

The band, together with Sheridan, recorded “My Bonnie Lies Over the Ocean”, “The Saints”, “Why“, “Nobody’s Child“, and “Take Out Some Insurance“. However, The Beatles, on their own, recorded “Ain’t She Sweet” and “Beatle Bop” aka “Cry for a Shadow“. Pete Best was the drummer, because at this stage, Ringo Starr was not yet part of the band.

They released “My Bonnie” as a single in Germany on the 23rd October, 1961, with credit to Tony Sheridan and The Beat Brothers. The B-side was “The Saints” (Oh when the saints, go marching in….) and the single reached number 32.

This single became the first commercially available disc by The Beatles. But that was just the start of a chain of events which would see The Beatles play their way into fame and fortune.

Raymond Jones was a fan of the band and he went into Brian Epstein’s record shop in Liverpool to buy “My Bonnie”. With curiosity running wild now, Epstein insisted on finding out more about the band. Obviously this ended with him becoming manager of The Beatles.

A kid had gone into Brian’s record store and asked for My Bonnie by The Beatles. Brian had said, ‘No it’s not, it’s by Tony Sheridan,’ and he ordered it. Then Brian heard that we were playing 200 yards away. So he came to the Cavern and the news got to us: ‘Brian Epstein is in the audience – he might be a manager or a promoter. He is a grown-up, anyway.’ It was Us and Grown-ups then.

“My Bonnie” became a UK single release on the 5th January, 1962, with the B-side being “The Saints”. Furthermore, Epstein insisting the credits should be Tony Sheridan and The Beatles.

Tony Sheridan and The Beatles began recording “My Bonnie” on the 22nd June, 1961, at the Friedrich-Ebert-Halle school in Hamburg, Germany.

“We did a recording with Tony Sheridan, My Bonnie, for Bert Kaempfert, a band leader and producer. It was actually ‘Tony Sheridan und die Beat Brothers’. They didn’t like our name and said, ‘Change to The Beat Brothers; this is more understandable for the German audience.’ We went along with it – it was a record”.

“It’s just Tony Sheridan singing with us banging in the background, it’s terrible, it could be anybody.”

All in all, The Beatles spent two days recording their songs at the Friedrich-Ebert-Halle school.

In Germany, the song reached number 32 in the charts and the intro was in German. However, the UK release had an English intro but only reached number 48 with the American release getting to number 26. Meanwhile in Australia, it only peaked at number 29. These figures matter not because the juicy bits of The Beatles was yet to come!

Tagged My Bonnie, My Bonnie Lies Over the Ocean, Top Ten club in Hamburg. Bookmark the permalink.

2 Responses to My Bonnie