To begin with, “Nobody’s Child” is a cover song The Beatles would sing in Germany with singer, Tony Sheridan. Of course, in those days The Beatles were the backing singers with the name “Beat Brothers”. The only way to get hold of a copy was through a German import – “The Beatles’ First” album. However, there are many other releases of the album now in various forms with many different sleeves. See also “Sweet Georgia Brown“. 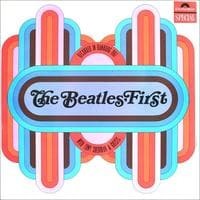 ** In short, it is almost certain that George Harrison and John Lennon do not play a part in this recording. Also, in these early days, Ringo Starr was not a member of The Beatles.

Hank Snow (The Singing Ranger) and his Rainbow Ranch Boys recorded this song in 1949, but it never got in the charts anywhere. Be that as it may, it was still one of his “standards”. It is a very sad song about an orphan boy whom nobody wants to adopt because he is blind. Snow sang it in a country style, of course.

In the early days of The Beatles development, whether they were The Quarrymen or even The Beat Brothers, they would regularly sing cover songs. This was the case with most up-and-coming bands. Although only Paul McCartney was playing on “Nobody’s Child”, we include it here at the Cavern Club because it is part of the band’s development.

Tony Sheridan and The Beat Brothers recorded “Nobody’s Child” at Studio Rahlstedt in Hamburg, Germany sometime during June 1961. Although the exact date of this recording eludes us all, we think it may have been on the 22nd or the 23rd.

By 1964, The Beatles were extremely famous, so they released the record in America that year with the artists being The Beatles.

Apart from The Beatles covering this song many other artists have too. For example, Lonnie Donegan, Billy Fury, and Karen Young who took it to number 6 in the UK charts in 1969.

The song was also the first track on the “Nobody’s Child: Romanian Angel Appeal” album from The Traveling Wilburys from 1990. Of course, George Harrison was a member of the group. There is a high probability that he played along with The Beat Brothers while gigging in the early days.