“Old Brown Shoe” is the B-side of a Beatles’ single release in 1969. Of course, the A-side is “The Ballad of John and Yoko”. However, now the song is available on the “Past Masters” album. Indeed, the demo version is also available on their “Anthology 3” album as well.

This George Harrison song was the B-side of a Beatles’ none-album single and as such appears on the “Past Masters” album from 1988. Harrison wrote the song in late 1968 using a piano at first. However, there is a slight indication that the rhythm may indicate the influence of ska music.

In the UK, this was only the second time that a Harrison composition found its way on to a Beatles’ single. 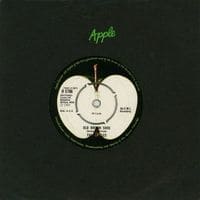 The content of Harrison’s lyrics started as a study in opposites.

“I started the chord sequences on the piano, which I don’t really play, and then began writing ideas for the words from various opposites… Again, it’s the duality of things – yes no, up down, left right, right wrong, etcetera”.

The Beatles tried this idea as well as word association in their 1967 single “Hello, Goodbye“, of course. At that time, The Beatles also began experimenting successfully with randomness too.

The Beatles began rehearsing “Old Brown Shoe” during January but they didn’t record the song then. However, on the 25th February, 1969, the day of his 26th birthday, George Harrison recorded a demo at the EMI Studios. Indeed, this demo is available on the Anthology 3 album from 1996.

On the 20th March, 1969, John Lennon married Yoko Ono in Gibraltar, a British overseas territory off the coast of Spain. Lennon’s account of his wedding and honeymoon became the subject of The Beatles’ next single, “The Ballad of John and Yoko” which the band recorded on the 14th April, 1969.

When The Beatles were looking for a B-side to accompany Lennon’s recollection, they took another look at “Old Brown Shoe”. During the afternoon sessions on the 16th April, George Harrison recorded a second demo of the song. The band deemed it a suitable proposition after they took a listen to Harrison’s demo and then began recording it on the same evening when they recorded four takes.

The recordings took place in EMI’s Studio Three where Harrison sung in a corner in order to capture the reverberation from the room.

The prominent bass line from George Harrison is particularly noticeable. In order to replicate the bass line on Harrison’s demo, they doubled up McCartney’s lead guitar and Harrison’s bass. When interviewed about the bass line, Harrison recalls: “That was me going nuts. I’m doing [on the bass] exactly what I do on the guitar”.

On the 18th April, further overdubbing took place. This saw Lennon’s rhythm guitar piece dropped in favour of a new Hammond organ part from Harrison. Further tweaks and additions to the guitar work from Harrison completed the “Old Brown Shoe” recording sessions. Obviously, with the separate tape tracks in place, the final official mix became available for the new single.

Although “Old Brown Shoe” was the B-side to “The Ballad of John and Yoko” single, it still qualifies has having a degree of chart success. After all, this was The Beatles and flipping over their singles was a must!

The single made it to number one in many countries such as the UK and Australia but not in America.