Paperback Writer was indeed another number one record for The Beatles. In fact, the record reached the top spot in most countries where released. However, it now appears on the 1988 “Past Masters” album. Obviously, with the record being number one, it also qualifies to be on the 1 (One) album.

Written mostly by Paul McCartney and credited to Lennon–McCartney as usual, “Paperback Writer” was The Bealtes’ eleventh single in May 1966.

According to one source, McCartney wrote the song after his aunt suggested he should “write a single that wasn’t about love”. After all, The Beatles sang many of those! 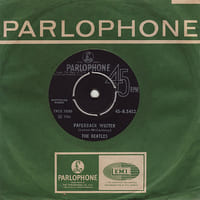 Then later on, “With that thought obviously still in his mind, he walked around the room and noticed that Ringo was reading a book. He took one look and announced that he would write a song about a book.”

“I’d had a thought for a song and somehow it was to do with the Daily Mail so there might have been an article in the Mail that morning about people writing paperbacks. Penguin paperbacks was what I really thought of, the archetypal paperback.”

Apart from moving away from the love song theme, McCartney wanted it to be a song with a melody using a single, static chord. He says, “John and I would like to do songs with just one note like ‘Long Tall Sally.’ We got near it in ‘The Word‘”. However, he didn’t quite achieve the goal. This is because the verse remains on G until the end, then it moves on to the C note.

On the third verse we can hear John Lennon and George Harrison singing the French nursery rhyme “Frère Jacques”.

The Beatles began recording “Paperback Writer” on the 13th of April, 1966. This was in Studio Three at the EMI Studios in London during the 8.00pm-2.30am sessions. They recorded two takes with the second being suitable for use as the basic rhythm track. Overdubbing and other adjustments occurred on the 14th April.

John Lennon was curious as to why the bass on a Wilson Pickett song was stronger than on any of The Beatles’ records. So, they looked into ways of rectifying this position.

“Paperback Writer was the first time the bass sound had been heard in all its excitement. For a start, Paul played a different bass, a Rickenbacker. Then we boosted it further by using a loudspeaker as a microphone. We positioned it directly in front of the bass speaker and the moving diaphragm of the second speaker made the electrical current.”

Engineer Emerick also explained that the single, “Paperback Writer” together with its B-side, “Rain”, were louder than any other Beatles’ record so far. They achieved this due to a new piece of equipment developed at the Abbey Road Studios. This machine, the “Automatic Transient Overload Control”, allowed for extra bass while playback on the turntable remained stable with no “needle jump”.

On the 19th May, 1966, The Beatles made 3 music videos to accompany the Paperback Writer single. There was one colour and two black and white productions. The colour one from the EMI Studios was for The Ed Sullivan Show, which went out on 5th June. The two others were for British Television shows Ready Steady Go! (3rd June) and Thank Your Lucky Stars (25th June).

Meanwhile, The Beatles made another colour promo film on the 20th May for BBC’s Top of the Pops. This was in the grounds near the statues and in the conservatory at Chiswick House in west London .

Just to point out that The Beatles only ever made one live appearance on Top of the Pops. This was on the 16th June, 1966, while they were miming to Paperback Writer. The cost of video tape those days was very expensive so the BBC would just record over them. Luckily, the promotional videos remain intact.

On the subject of promotion, the band also had a promotional picture. Bizarrely, it shows The Beatles with joints of raw meat on their laps while holding decapitated baby dolls. In the US, the image was briefly on their “Yesterday and Today” album which gave it the nickname of the “butcher cover”.

“The idea was that we’d use them in America as well as the UK, because we thought, ‘We can’t go everywhere. We’re stopping touring and we’ll send these films out to promote the record.’ It was too much trouble to go and fight our way through all the screaming hordes of people to mime the latest single on Ready, Steady, Go! Also, in America, they never saw the footage anyway.

Once we actually went on an Ed Sullivan show with just a clip. I think Ed Sullivan came on and said, ‘The Beatles were here, as you know, and they were wonderful boys, but they can’t be here now so they’ve sent us this clip.’ It was great, because really we conned the Sullivan show into promoting our new single by sending in the film clip. These days obviously everybody does that – it’s part of the promotion for a single – so I suppose in a way we invented MTV.”

The single was a worldwide chart success hitting number one in many countries such as the UK, Australia, New Zealand, Canada and America.