The “Penny Lane” single was a chart success for The Beatles in 1967. In fact, it was a double A-side with “Strawberry Fields Forever”. So it’s not surprising the record topped the charts worldwide. However, the song is now available on many Beatles’ albums, including the “Magical Mystery Tour” and “1” (One).

Imagine waking up on the 13th February, 1967, knowing there is a new single by The Beatles on sale that day. Then imagine again that this single is a double A-side with Penny Lane on one side and Strawberry Fields Forever on the other side! 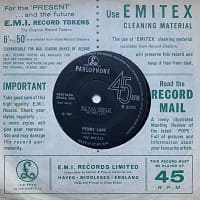 Penny Lane is a road in Liverpool but it also describes the wider area in general. Within the area was major bus terminus close to Smithdown Place roundabout. The bus station was a vital connection point for John Lennon, Paul McCartney and George Harrison while they were at school.

“A lot of our formative years were spent walking around those places. Penny Lane was the depot I had to change buses at to get from my house to John’s and to a lot of my friends. It was a big bus terminal which we all knew very well. I sang in the choir at St Barnabas Church opposite.”

“The bank was there, and that was where the tram sheds were and people waiting and the inspector stood there, the fire engines were down there. It was just reliving childhood.”

Although the song is an absolute classic, the scene suggests some surreal, almost kaleidoscopic images. For example, “beneath the blue suburban skies” suggests a sunny summer’s day – “in summer meanwhile back”. On the other hand we get “the fireman rushes in from the pouring rain”.

Then there is “a pretty nurse is selling poppies from a tray” suggesting it could be close to Remembrance Day (11th November). So, as well as it being a clear sunny day in summer, it is also winter at the same time. Of course, their memories could be from over a period of time and not from one particular day.

Although the fire station was not in the immediate area, the barber shop was. Then there is a reference to some slang words “Four of fish and finger pies”. “A four of fish” being what you would ask for in a traditional fish and chip shop – fourpennyworth of fish and chips. However, the “finger pie” rather crudely refers to intimate petting!

“And we put in a joke or two: ‘Four of fish and finger pie.’ The women would never dare say that, except to themselves. Most people wouldn’t hear it, but ‘finger pie’ is just a nice little joke for the Liverpool lads who like a bit of smut.”

Paul McCartney wrote “Penny Lane” while John Lennon wrote “Strawberry Fields Forever”. They both had different memories of their childhood, of course.

“We were often answering each other’s songs so it might have been my version of a memory song but I don’t recall. It was childhood reminiscences: there is a bus stop called Penny Lane. There was a barber shop called Bioletti’s with head shots of the haircuts you can have in the window and I just took it all and arted it up a little bit to make it sound like he was having a picture exhibition in his window.

It was all based on real things; there was a bank on the corner so I imagined the banker, it was not a real person, and his slightly dubious habits and the little children laughing at him, and the pouring rain.

The fire station was a bit of poetic licence; there’s a fire station about half a mile down the road, not actually in Penny Lane, but we needed a third verse so we took that and I was very pleased with the line ‘It’s a clean machine’. I still like that phrase, you occasionally hit a lucky little phrase and it becomes more than a phrase. So the banker and the barber shop and the fire station were all real locations.”

Since The Beatles tour of America in August, 1966, the band were largely keeping a low public profile. Brian Epstein had some concerns and thought that the band’s popularity might suffer. So, he confided in George Martin who said that The Beatles already recorded both “Strawberry Fields Forever” and “Penny Lane”, describing them as the best songs so far. That was a pretty bold statement, after all, Beatlemania was still gripping their fans!

In order to relieve the band from visiting broadcasting studios worldwide, they decided a promotional video would be just as good. The resulting music video for Penny Lane was one of the first examples of this sort of promotion.

The promotional video shows footage of Liverpool including the green number 86 bus to Penny Lane and the shelter on the roundabout. However, the street scenes filmed on the 5th February, 1967, show The Beatles in and around Angel Lane in Stratford, London. The Beatles also rode horses during these shots.

Further filming in Knole Park in Sevenoaks, Kent, on the 7th February. The band rode horses again while dressed in matching red tunics. In the park scene, they sit at a table bearing a large candelabra. One of the waiters in the scene is Beatles’ roadie, Mal Evans. Then, at the end of the film, John Lennon overturns the table and everything on it ends up on the ground.

Just to point out that weeks earlier they also used Knole Park to shoot for Strawberry Fields Forever.

Work on Penny Lane started in Studio 2 at the EMI Studios in Abbey Road, London on the 29th December, 1966. Paul McCartney recorded six takes by himself but this involved only the piano work in the beginning.

Then, on the 30th December, after mixing down all these separate tracks together, they had the first track of a new tape. John Lennon and Paul McCartney also recorded vocals on this day.

The use of the piccolo trumpet solo came about after Paul McCartney didn’t like the original instrumental fill.  So, they hired trumpeter David Mason to play the instrument on the 17th January. McCartney saw Mason performing Bach’s Brandenburg Concerto on BBC 2 on the 11th January.

“The result was unique, something which had never been done in rock music before.”

Some early American promo versions of Penny Lane had an additional piccolo trumpet piece at the end of the record. The radio stations that had them soon got hold of the new mix. Those promo discs are some of the rarest Beatles’ records.

Beatlemaniacs can listen to the version with an additional piccolo trumpet piece on the Anthology 2 album.