This information page is about the Beatles’ song, “Please Please Me”. There is also an album by the same name. Of course, the song comes from this album which is The Beatles’ first studio effort. The single release done reasonably well considering the band were just developing. Be that as it may, there are a few versions of this song available on Beatles’ albums.

Written by John Lennon at his Aunt Mimi’s house in Menlove Avenue, Liverpool, “Please Please Me” was the follow-up single to “Love Me Do” which only peaked at number 17 in the UK charts.

“We’d had a top 30 entry with Love Me Do and we really thought we were on top of the world. Then came Please Please Me – and wham!

We tried to make it as simple as possible. Some of the stuff we’ve written in the past has been a bit way-out, but we aimed this one straight at the hit parade.” 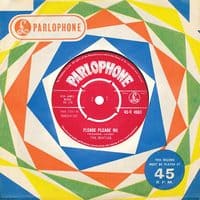 When George Martin first heard the song, it was too slow for his liking with John Lennon singing in the style of Roy Orbison. So, he used his influence and got the band to spruce it up to what we know now.

“At that stage Please Please Me was a very dreary song. It was like a Roy Orbison number, very slow, bluesy vocals. It was obvious to me that it badly needed pepping up. I told them to bring it in next time and we’d have another go at it.”

“We sang it and George Martin said, ‘Can we change the tempo?’ We said, ‘What’s that?’ He said, ‘Make it a bit faster. Let me try it.’ And he did. We thought, ‘Oh, that’s all right, yes.’ Actually, we were a bit embarrassed that he had found a better tempo than we had.”

“Please Please Me is my song completely. It was my attempt at writing a Roy Orbison song, would you believe it? I wrote it in the bedroom in my house at Menlove Avenue, which was my auntie’s place… I remember the day and the pink coverlet on the bed and I heard Roy Orbison doing Only The Lonely or something. That’s where that came from.

The Beatles began recording the single, “Please Please Me” on the 26th November, 1962 at the EMI Studios where they recorded 18 takes. However, there are some slight variations to the final products.

For example, the mono versions on the single and mono album vary slightly. While the stereo version is a combination of takes 16, 17 and 18 and has its own differences. In particular, Harrison’s guitar before the final verse drops down slightly. Then there is John Lennon who chuckles a little in the final verse when he sings “Come on”.

There is also another version of “Please Please Me” from the 11th of September. Indeed, this version has Andy White on drums and this is commercially available on the band’s 1995 album, Anthology 1. However, we don’t get to hear the slow version as that version no longer exists.

After The Beatles recorded “Please Please Me” and its B-side “Ask Me Why”, they then recorded the Paul McCartney song, “Tip of My Tongue”. George Martin persuaded the band to scrap it which they did. Indeed, they gave that song to Tommy Quickly who released a single version which was a flop.

In the early sixties there were various charts and this persists in the present day, of course. Therefore, in some of the minor charts, the single did reach number one.

Since this single only reached number 2 in the official UK charts, it didn’t qualify to be on their 2000 album “1”. Be that as it may, this was very early in the band’s career. Indeed, the world wasn’t yet ready for what was about to come from the Fab Four.

Nevertheless, the public did get their first glimpse of what The Beatles were all about on the 19th January, 1963. This is because they made their first national TV appearance on the ITV production, “Thank Your Lucky Stars”. Furthermore, they only sang one song and this was “Please Please Me”. The recording of the show took place on the 13th August that year at the Alpha Television Studios in Birmingham.