PS I Love You

“PS I Love You” is the B-side to The Beatles’ debut single, “Love Me Do”. However, the song is also on their debut album, “Please Please Me” from 1963.

PS I Love You

Paul McCartney wrote the song while he was in Hamburg, Germany. Although some folk think he wrote it for then-girlfriend Dot Rhone, McCartney distances himself from that theory:

“It’s just an idea for a song really, a theme song based on a letter, like the Paperback Writer idea.

It was pretty much mine. I don’t think John had much of a hand in it. There are certain themes that are easier than others to hang a song on, and a letter is one of them. ‘Dear John’ is the other version of it. The letter is a popular theme and it’s just my attempt at one of those. It’s not based in reality, nor did I write it to my girlfriend from Hamburg, which some people think.” 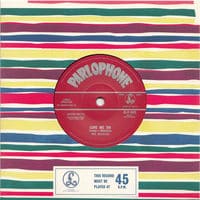 “That’s Paul’s song. He was trying to write a Soldier Boy like The Shirelles. He wrote that in Germany or when we were going to and from Hamburg. I might have contributed something. I can’t remember anything in particular. It was mainly his song.”

The Beatles began recording “PS I Love You” on the 11th September, 1962, at the EMI’s Abbey Road Studios in London. They recorded ten takes during the 10 am – 1 pm session.

George Martin wasn’t at the studio at the time of recording. He wasn’t even aware that Ringo Starr joined The Beatles as a replacement for Pete Best. Martin thought that Pete Best shouldn’t be the drummer on the day having heard the band previously, so they hired session drummer, Andy White, to play the drums.

Ron Richards was covering for George Martin on the day. Meanwhile, Ringo Starr’s job was to play the maracas after the producers had concerns over his previous drumming sessions on the 4th September.

For the Beatlemaniacs, there is also a version of “PS I Love You” on their 2013 album, “On Air – Live At The BBC Volume 2”. Of course, that version is from their early BBC Radio appearances. In fact, this version was on their “Pop Go The Beatles” show from the 25th June, 1963 (recorded 17th June). They recorded the song another two times for those early BBC Radio programmes.

Even with modern-day technology it would be almost impossible to separate the vocals and instruments in order to create a stereo mix. However, we don’t know what the future might hold for recordings such as these.