“Rain” is the B-side to the “Paperback Writer” single by The Beatles, of course. It’s a typical good example of a psychedelic song by the Fab Four. Neither song is on their “Revolver” album although they recorded it during those sessions. However, it does appear on the “Past Masters” album. 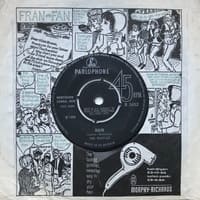 Although the credits go to Lennon-McCartney, most people say it is a John Lennon song. However, there is a slight conflict with this statement:

“I don’t think he brought the original idea, just when we sat down to write, he kicked it off. Songs have traditionally treated rain as a bad thing and what we got on to was that it’s no bad thing. There’s no greater feeling than the rain dripping down your back. The most interesting thing about it wasn’t the writing, which was tilted 70-30 to John, but the recording of it.”

“Rain” is the first popular song to include reversed sounds but this was slap bang in the middle of the Psychedelic Era! Of course later, the Revolver track, “Tomorrow Never Knows“, also has reversed sounds. The Beatles recorded both of these songs at roughly the same period in time. Obviously, they were using the studio to good effect with their experimentation.

There are two explanations as to the inspiration for the song. Both John Lennon and Neil Aspinall agree on following version of events. In 1964, when The Beatles arrived in Sydney, Australia, it was pouring with rain. Lennon said, “I’ve never seen rain as hard as that, except in Tahiti”. He later explained that it was “about people moaning about the weather all the time”.

The alternative theory is that people experience “rain” and “sun” during a benign LSD trip. After all, The Beatles were into drugs by now. Possibly then, it may be a combination of both.

The Beatles began recording “Rain” on the 14th April, 1966, in Studio Three of the EMI Studios in London during the 8.30pm-1.30am session. There were five takes and this was the same day that they were overdubbing Paperback Writer.

Around this time, there was much experimentation going on at the Abbey Road Studios in order to achieve new sounds and effects. Engineer, Geoff Emerick, says that by recording the backing track “faster than normal”, it would alter the sonic texture when played back at normal speed. He further explained that “the music had a radically different tonal quality.”

On the other hand, they recorded John Lennon’s lead vocal on a low tape speed. When played back at normal speed, it made his voice sound higher. On the last verse, they also used reverse vocals. This was the first time that this technique would be on a commercially available record.

Later that year, we would see a similar technique on a single by Napoleon XIV. The B-side to his “They’re Coming to Take Me Away, Ha-Haaa!” was the A-side in reverse.

Overdubbing of “Rain” occurred on the 16th April in Studio Two and the track was complete.