“Real Love” is a John Lennon song but we include it on the Beatles’ Cavern Club because it also appears on the Anthology 2 album. In fact, it was the last Beatles’ single too (1996). 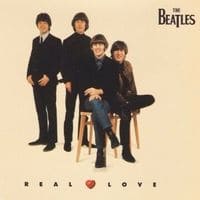 John Lennon first recorded the song in 1977, long after The Beatles broke up. However, this recording was on a handheld tape recorder while playing his piano at home. He went on to record six takes of the song in 1979.

In January, 1994, Yoko Ono gave Paul McCartney a cassette tape with this song as well as “Free As A Bird”, “Grow Old With Me” and “Now And Then”.

Lennon died on the 8th December, 1980, of course. However, the surviving Beatles reworked the song and released it as a single in 1996. This was the last song with new material from The Beatles with credits as such.

By now, CD’s were the format of choice instead of the old 7″ vinyl records. The resulting CD single had 3 “B-sides”. Firstly, there was Baby’s In Black (Hollywood Bowl, August, 1965, version). Secondly, we get Yellow Submarine (new mix including more sound effects). Thirdly, there was Here, There And Everywhere (an alternative version).

On Anthology 2, Real Love is the first song on the album.

George Martin decided not to produce the recording, so the band called upon ELO’s Jeff Lynne to help out. After all, he was co-producer of “Free as a Bird“, the previous Beatles’ single. He was also part of The Traveling Wilburys with George Harrison.

The original demo proved difficult to work with:

The problem I had with Real Love was that not only was there a 60 cycles mains hum going on, there was also a terrible amount of hiss, because it had been recorded at a low level. I don’t know how many generations down this copy was, but it sounded like at least a couple. So I had to get rid of the hiss and the mains hum, and then there were clicks all the way through it.

When we saw the graph of it on the computer, there were all these spikes happening at random intervals throughout the whole song. There must have been about 100 of them. We’d spend a day on it, then listen back and still find loads more things wrong. But we could magnify them, grab them and wipe them out.

It didn’t have any effect on John’s voice, because we were just dealing with the air surrounding him, in between phrases. That took about a week to clean up before it was even usable and transferable to a DAT master. Putting fresh music to it was the easy part!

Although most people were happy with the result, it appears that George Harrison wasn’t. Indeed, this may have helped him make a decision not to appear on another song, Now And Then.

The heady days of Beatlemania had long gone when The Beatles released this single in March, 1996. However, there is always going to be widespread interest with a release of new Beatles’ material.

In the UK, BBC Radio One decided not to play the single – “It’s not what our listeners want to hear … We are a contemporary music station”. This is in contrast to the early 1960’s when they couldn’t get enough of The Beatles! Be that as it may, the song aired on many other radio stations.

Thirty years after the height of Beatlemania, the song made it to the top ten in many countries. Australia couldn’t get enough of The Beatles so this single got to a respectable sixth place. It reached tenth place in America’s Cash Box chart. In the UK it reached number four in the official charts.

The subsequent video shows Paul McCartney, George Harrison and Ringo Starr recording in Sussex. There’s also many shots of The Beatles, including John Lennon, during their career together.