To begin with, The Beatles recorded three songs with “Revolution” in the title. However, this page refers to the single release with the A-side being “Hey Jude”. The single release is indeed the hard rock version. The softer bluesy version being on the “White Album“, of course. But, to distinguish between the two, the slower “White Album” version has the name “Revolution 1“.

John Lennon began writing “Revolution” in India during the band’s stay at the Maharishi’s Ashram where they were learning Transcendental Meditation. 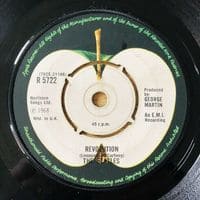 The only other time that The Beatles released a song with a reference to politics was “Taxman“, of course. However, that was a worthwhile dig at the British tax system.

The inspiration behind Revolution was the many political stories in the media at the time, in particular, the Vietnam War. John Lennon finished the lyrics to the song in May, 1968 after he returned back to England. During that month, there was quite a bit civil unrest in France. This may have been the trigger in order to publish the song sooner.

Although the band recorded a version of Revolution which John Lennon wanted to be part of a single, Paul McCartney and George Harrison said it was too slow. This version is on the self-titled “White Album”. John Lennon began sprucing the track up somewhat so it became an heavy rock version. The rock version then became the B-side to the Hey Jude single.

For years, on The Beatles’ tours, Brian Epstein had stopped us from saying anything about Vietnam or the war. And he wouldn’t allow questions about it. But on one of the last tours, I said, ‘I am going to answer about the war. We can’t ignore it.’ I absolutely wanted The Beatles to say something about the war.”

Obviously John Lennon got his way and the message went out via a very successful single, albeit on the B-side. Although The Beatles recorded this version many weeks after the original Revolution 1 track, the single version was commercially available first.

The Beatles began sprucing up the Revolution song on the 9th July, 1968. They used Studio Three at the EMI Studios in London to rehearse the song during the 4.00pm-9.00pm session.

Then on the 10th July, they began recording the song. They recorded 10 takes with the last one being suitable for the rhythm track for overdubs etc. The song was revolutionary in itself but the recording became The Beatles’ most distorted track to date. This was a deliberate ploy because of the Lennon’s insistence.

To distort the sound, engineer Geoff Emerick routed the guitar signal through two microphone preamplifiers in series while keeping the amount of overload just below the point of overheating the console.  Such was the abuse of the equipment, Emerick explains, “If I was the studio manager and saw this going on, I’d fire myself.”

“We got into distortion on that, which we had a lot of complaints from the technical people about. But that was the idea: it was John’s song and the idea was to push it right to the limit. Well, we went to the limit and beyond.”

Between the 11th and 13th of July, further overdubs occurred in Studio Two with vocals, bass, lead guitar and electric piano.

When released as the B-side to Hey Jude, it was the start of yet another revolution of sorts. This was to launch The Beatles’ own record label – Apple Records. Also released on the new label was, Mary Hopkin’s “Those Were the Days” and Jackie Lomax’s “Sour Milk Sea” – a George Harrison composition and Beatles’ recording. The other release was The Black Dyke Mills Band’s “Thingumybob”.

Music critic, Richie Unterberger, describes the start of the Revolution song as “a startling machine-gun fuzz guitar riff”. Throughout the song, the distorted guitars played by Lennon and Harrison are prominent. Likewise, the distorted heavy drum beat from Ringo Starr is also very prominent.

Revolution hit the shops in late August 1968, months before Revolution 1 became commercially available on the White Album. John Lennon’s message finally circulated worldwide. In fact, the single reached number one an almost every country where released.