“Savoy Truffle” is a unique song by The Beatles. Indeed, they recorded this track for their “White Album” in 1968. George Harrison wrote the song while thinking of his friend, Eric Clapton. In short, Clapton had a liking for chocolates, and Harrison, through his song, warned of the effects they would have on his teeth. So, the song listed all the various flavours in a box of Mackintosh’s “Good News” chocolates!

This is a clever Beatles’ song which lists the contents of a box of chocolates. George Harrison used the box of Mackintosh’s “Good News” chocolates as a basis for the song because his friend, Eric Clapton, began eating them after a he came to Harrison’s home on one of his many visits. This was a way of Harrison warning Clapton about the possibility of tooth decay and the subsequent pain.

“Savoy Truffle is a funny one written whist hanging out with Eric Clapton in the ’60s. At that time he had a lot of cavities in his teeth and needed dental work. He always had a toothache but he ate a lot of chocolates – he couldn’t resist them, and once he saw a box he had to eat them all. He was over at my house, and I had a box of Good News chocolates on the table and wrote the song from the names inside the lid. I got stuck with the two bridges for a while and Derek Taylor wrote some of the words in the middle – ‘You know that what you eat you are’.”

Although some of the named chocolates in the song are from the lid of the box and are authentic, Harrison invented some. For example, cherry cream, coconut fudge and pineapple heart were not part of the original confectionery. Here’s the lid from the box of chocolates in question. 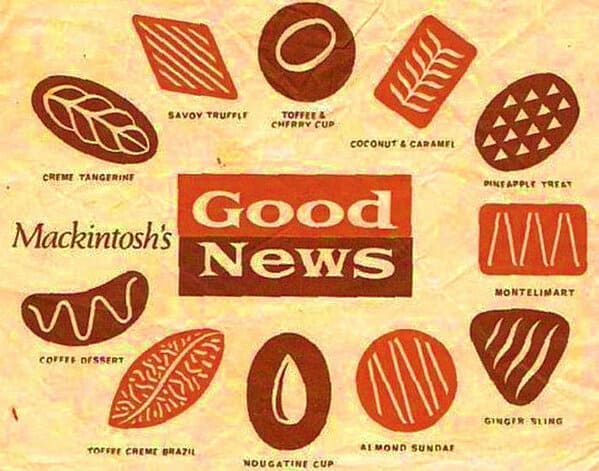 Lid from a box of Mackintosh’s Good News chocolates

Harrison obviously shows his passion for rhythm and blues with this song. However, he needed a little assistance to write it. He took some guidance from Derek Taylor who was Apple Records’ press officer at the time. Taylor pointed out the title of the 1968 American counterculture film “You Are What You Eat” which helped with the second bridge section.

Within the song, there is a reference to The Beatles’ song, “Ob-La-Di, Ob-La-Da“, of course. This was not a new fad because John Lennon previously incorporated a Beatles’ song in “I Am The Walrus” when he gave a mention to “Lucy in the Sky“.

Although the song seems innocent enough, there is an alternative theory by musicologist, Walter Everett. He suggests that it might have been George Harrison’s attempt to rewrite a Byrds’ song, “Artificial Energy” from 1968. That song warns about the dangers of using drugs. Be that as it may, the song has a clear, basic message with George Harrison’s guitar solo dramatically reflecting the feel of a dentist’s drill.

John Lennon does not feature at all on “Savoy Truffle”. However, the rest of the band began recording the track on the 3rd October, 1968 in the Trident Studios in London. There was only one take on this day and on the 5th of October, Harrison recorded his vocal track for overdubbing.