“She’s A Woman” is not on any of the original 12 Beatles’ albums. This is because it was the B-side to the 1964 single “I Feel Fine”. However, it does appear on some compilation albums. The song also features in their 1965 film, Help!

7 inch single
Past Masters
Live At The BBC
Anthology 2

Mainly written by Paul McCartney, but credited to Lennon-McCartney obviously, this song was the Paul’s attempt to sing in a in the style of Little Richard. However, this gave the song a unique feel to it. Indeed, Paul McCartney provides the melody vocals supported by a countermelody through his bass and backing piano. Also driving the song is the backbeat chords coming from John Lennon’s guitar.

The song is almost lacking Ringo Starr’s bass kick due to the compression in the final mix, possibly partly due to the oversaturation of Paul’s bass guitar work. But, even though the drum beat on this one is slightly shallow, due to the mixing process, this is a fine song that could easily have been the A-side.

The song was on the last Beatles’ single of 1964 but it may have received a ban had the censors picked up the reference to drugs. 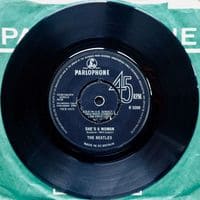 During a meeting with Bob Dylan in August, 1964, they had their first introduction to cannabis. The sixties had so many songs with a reference to drugs, of course. However, this might just be the first hint of drugs in a Beatles’ song.

“That’s Paul with some contribution from me on lines, probably. We put in the words ‘turns me on’. We were so excited to say ‘turn me on’ – you know, about marijuana and all that, using it as an expression.”

In 1965, The Beatles would use this song as part of their live gigs.

Also In the Beatles’ Movie, Help!

We also get to hear “She’s A Woman” in the 1965 Beatles’ film Help! However, the song comes from a tape machine underground. This is while the cult members attempt to create an explosion to try and get back the sacrificial ring. Above ground, The Beatles are recording “The Night Before” under the protection of the British Army.

The Beatles began recording “She’s A Woman” on the 8th October, 1964. This was in Studio Two at the EMI Studios in London London (2.30pm-6.00pm session) where the band recorded 7 takes. From those, take 7 was suitable to become the main track for overdubbing. George Harrison’s lead guitar being part of the overdubbing process together with McCartney’s vocals and piano. Then they added Ringo Starr’s shaker, a chocalho, which is prominent throughout.

The song also appears on their 1994 album, “Live At The BBC”. This recording took place at London’s Playhouse Theatre on the 17th November, 1964 for the Top Gear show that had an airing on the 26th November. The Anthology 2 version is a live version recorded on the 30th June, 1966, at the Nippon Budokan Hall, Tokyo.

Although this was a B-side, it was part of a single which went to number one in the UK with “I Feel Fine” as the A-side. In fact it reached number one in most countries where released.

In America, this song became the band’s 11th top ten hit in 1964. This was a record (most top ten hits in a calendar year) which would last until 2018 when “Drake” broke that record.