“Something” is a famous Beatles’ song which was also a single release from 1969. Indeed, this was one of George Harrison’s most finest compositions. Then Frank Sinatra endorsed the song by saying it is “the greatest love song of the past 50 years”. This record was a double A-side single that also has “Come Together” as the flip side.

Although the album was already available, the single came from the album. Previously, singles came first, then the album, so this was a unique move by the band. Be that as it may, the single reached the top ten in many countries. In fact, it went to number one in Australia.

George Harrison started writing “Something” in September, 1968, during the sessions that would give us the fantastic self-titled double album, aka “The White Album“. He didn’t actually finish the song until 1969 though.

“I had written Something on the piano during the recording of the White Album. There was a period during that album when we were all in different studios doing different things trying to get it finished, and I used to take some time out. So I went into an empty studio and wrote Something.” 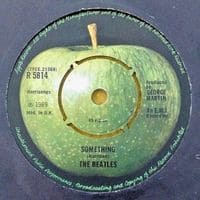 George Harrison says he wrote the song with Ray Charles in mind, possibly in the styling, but the inspiration comes from his wife at the time.

“He told me, in a matter-of-fact way, that he had written it for me. I thought it was beautiful …”

“It has probably got a range of five notes, which fits most singers’ needs best. When I wrote it, in my mind I heard Ray Charles singing it, and he did do it some years later. At the time I wasn’t particularly thrilled that Frank Sinatra did Something. I’m more thrilled now than I was then.

I wasn’t really into Frank – he was the generation before me. I was more interested when Smokey Robinson did it and when James Brown did it. But I’m very pleased now, whoever’s done it. I realise that the sign of a good song is when it has lots of cover versions.”

Many famous artists have recorded cover versions of “Something” over the years, including Frank Sinatra, of course. However, other great artists include, Shirley Bassey, Smokey Robinson, Peggy Lee, Willie Nelson and Elvis Presley. But this song had over 150 cover versions by the end of the seventies and many others continue to record it. It remains the second most covered Beatles’s song after Paul McCartney’s “Yesterday“.

“I thought it was George’s greatest track – with Here Comes The Sun and While My Guitar Gently Weeps. They were possibly his best three. Until then he had only done one or two songs per album. I don’t think he thought of himself very much as a songwriter, and John and I obviously would dominate – again, not really meaning to, but we were ‘Lennon and McCartney’. So when an album comes up, Lennon and McCartney go and write some stuff – and maybe it wasn’t easy for him to get into that wedge. But he finally came up with Something and a couple of other songs that were great, and I think everyone was very pleased for him. There was no jealousy. In fact, I think Frank Sinatra used to introduce Something as his favourite Lennon/McCartney song. Thanks Frank.”

Although The Beatles recorded 13 takes of the track on April 16th, 1969, George Harrison decided redo the song. So, on the 2nd May, at the EMI Studios, they recorded 36 takes of the rhythm track. Then, at the Olympic Sound Studios on the 5th May, Harrison added his lead guitar while Paul McCartney re-recorded his bass part. However, at this stage, John Lennon’s piano coda made the track around 8 minutes long.

The band once again paid attention to the song on July 11th with overdubbing and a song reduction. Indeed, at this point, they cut most of John Lennon’s piano playing out of the track leaving only a descending run that follows each pair of “I don’t know” vocal lines. Further overdubbing of handclaps together with Paul McCartney’s backing vocals occurred on the 16th of July.

Finally, on the 15th August, they overdubbed the string orchestration which George Martin arranged. The reduction mix on this day is the one we hear on the single and the Abbey Road album.

With the song being on the hugely successful Abbey Road album, it’s remarkable how high the single got in the charts. For example it got to number one in Australia, New Zealand, America and Canada. However, it only peaked at number 4 in the UK charts.

Just to point out that this was the first single release to feature a George Harrison composition on an A-side.