“Strawberry Fields Forever” is a single release from The Beatles in 1967. In fact, this song is part of a double A-side with “Penny Lane”. While recalling his childhood memories, John Lennon’s inspiration for the song came from his days playing in the garden of Strawberry Field. This was a Salvation Army children’s home in Liverpool.

John Lennon actually wrote the song while filming in Almería, Spain. Of course this is when Lennon acted in the anti-war comedy, “How I Won the War”. This was a Richard Lester film and Lennon played the role of Private Gripweed. 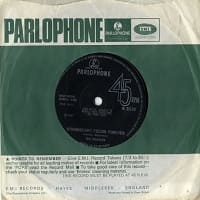 “Dick Lester offered me the part in this movie, which gave me time to think without going home. We were in Almerí­a, and it took me six weeks to write the song. I was writing it all the time I was making the film. And as anybody knows about film work, there’s a lot of hanging around.”

Obviously, just like the flip side of this song, “Penny Lane”, The Beatles take a nostalgic look back at their home town of Liverpool.

“I’ve seen Strawberry Field described as a dull, grimy place next door to him that John imagined to be a beautiful place, but in the summer it wasn’t dull and grimy at all: it was a secret garden. John’s memory of it wasn’t to do with the fact that it was a Salvation Army home; that was up at the house. There was a wall you could bunk over and it was a rather wild garden, it wasn’t manicured at all, so it was easy to hide in.”

John Lennon decided that “Strawberry Fields Forever” was his highest achievement while being a member of The Beatles. It allowed for creativity in abundance at a time when the band members were experimenting with drugs. Indeed this song came about during the transition period between their previous popular singles and the psychedelic era.

“The second line [sic] goes, ‘No one I think is in my tree.’ Well, what I was trying to say in that line is ‘Nobody seems to be as hip as me, therefore I must be crazy or a genius.’ It’s the same problem as I had when I was five: ‘There is something wrong with me because I seem to see things other people don’t see. Am I crazy, or am I a genius?’ … What I’m saying, in my insecure way, is ‘Nobody seems to understand where I’m coming from. I seem to see things in a different way from most people.'”

In essence, the double A-sided single marked the start of a new era. On the one hand it gave us a typical Beatles’ song in “Penny Lane”, while on the other hand, it gave us a glimpse into what was to come from the band with “Strawberry Fields Forever”. Indeed, this was a different kind of offering to the singles charts. However, it was highly influential on emerging bands and the psychedelic genre which would follow.

With the song’s working title being “It’s Not Too Bad”, The Beatles began recording “Strawberry Fields Forever” on the 24th November, 1966, in Studio 2 of EMI Studios, London. All in all, the band spent 45 hours on many takes spread over five weeks creating this masterpiece. Indeed, there was much experimentation with various instruments and recording tequniques.

In short, John Lennon knew what he wanted to create with “Strawberry Fields Forever”. So, to satisfy his requirements, the band made three separate tracks. The version we are familiar with is the combination of the second two versions both of which have a different tempo, mood and musical key. However, the first take is now available on their 1996 album, Anthology 2.

John Lennon gave the band a demonstration on his acoustic guitar, then they set about playing the song together. However, they soon abandoned this version after various instrumental and vocal overdubs. Indeed, Lennon just didn’t like the results of this version which starts with the line “Living is easy with eyes closed” instead of the chorus.

On the 28th November, 1966, The Beatles began recording the song again but with slightly different arrangements. This time we see Paul McCartney’s Mellotron introduction followed by the chorus. With the recording tape running faster than normal, Lennon recorded his vocals. The result on playback gave his voice a slurred sound to it.

Although John Lennon liked this version, it still wasn’t good enough. But, around one minute from it becomes part of the master tape which we are all familiar with.

Although Take 7 was decent, John Lennon still wasn’t happy with the results:

“He’d wanted it as a gentle dreaming song, but he said it had come out too raucous. He asked me if I could write him a new line-up with the strings. So I wrote a new score (with four trumpets and three cellos) …”

On the 8th and 9th of December, there were further attempts to record the rhythm track. But this time the tempo was a little quicker than previous attempts. During the second day, they mixed two of the 15 takes to create one mix. So, now the band had one mix on their four-track master.

Further overdubbing took place including George Martin’s brass and cello arrangements from the 15th of December. The sound was developing fast by now and after another mix down, there were two two tape tracks.

John Lennon liked both the lighter take 7 version and the intensity of take 26 but could still see scope for improvement to complete his dream for “Strawberry Fields Forever”.

“He [John Lennon] said, ‘Why don’t you join the beginning of the first one to the end of the second one?’ ‘There are two things against it,’ I replied. ‘They are in different keys and different tempos. Apart from that, fine.’ ‘Well,’ he said, ‘you can fix it!'”

On the 22nd December, Martin and Emerick had the unenviable task of joining together both takes. This wasn’t going to be easy but, by using vari-speed control on the tape machine, they speeded up take 7 while slowing down take 26. Luckily, they were able to compensate for the differences in key and speed.

Splicing the adjusted tapes around the one minute mark they were able to create something which John Lennon was reasonably happy with. However, in 1980, shortly before he died, John Lennon claims he wasn’t completely happy with the final version of the song using the words “badly recorded” to describe it. Moreover, he accusing Paul McCartney of subconsciously sabotaging the recording.

Although Lennon’s later revelations give us an insight into the darker days of The Beatles, the final mix is what we are all familiar with, and to most of us, that mix is perfect!

The Beatles were in the forefront of many things while they were together as a band. Long before MTV, The Beatles were making music videos to accompany their songs. This was a way of promoting their singles without the need for the band to visit numerous visits to television stations.

Shooting began for the promotional video on the 30th January, 1967, in Knole Park, Sevenoaks, Kent. Filming took place over two days with the band returning to make a promotional film for “Penny Lane” a week later.

The video shows all the band members sporting their new look moustaches while they wore psychedelic clothing. Gone too was their early image of “moptops”. Indeed, that image now belonged to American band “The Monkees” who were America’s answer to The Beatles. This was also the first time John Lennon was to wear his round “granny” glasses.

The music video relies on imagery rather than the band performing the song. In the studio, The Beatles used reverse sounds and they tried reverse imagery in this promotional film too. This would give us an illusion of Paul McCartney jumping up into a tree.

Featuring prominently in the promo film is both a decorated dead oak tree and an upright piano to which they pour paint over at the end. The dead oak tree is no longer in Knole Park.

Both John Lennon and Paul McCartney had different memories of their childhood, of course. While McCartney reflected with Penny Lane, Lennon done the same with Strawberry Fields Forever. Speaking about both songs, George Martin says that they are “two all-time great songs”.

Tagged Dead oak tree, Granny glasses, How I Won the War, It's Not Too Bad, Strawberry Fields Forever, The Monkees. Bookmark the permalink.

One Response to Strawberry Fields Forever