While in Germany, The Beatles had the name of The Beat Brothers. Indeed, they often would perform with lead vocalist, Tony Sheridan. This song, “Sweet Georgia Brown”, is indeed one of the songs that they sang together. 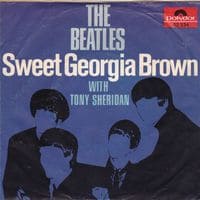 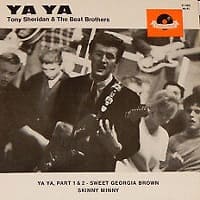 The Beatles began recording “Sweet Georgia Brown” on the 24th May, 1962 in the Friedrich-Eberts-Halle, Hamburg, Germany. In fact, they recorded two American standards that day, this version as well as “Swanee River“. Obviously, credit for this song goes to Tony Sheridan and the Beat Brothers. We also saw this arrangement on their single, “My Bonnie“.

The first recorded version stuck with the original lyrics, of course. Then, once The Beatles became famous, Tony Sheridan recorded a different version with slightly humorous lyrics. However, as yet, the second recording is not commercially available.

In Liverpool she even dared
To criticize The Beatles’ hair
With their whole fan-club standing there
Oh, Sweet Georgia Brown

Although not released in the UK, the record had a few variants in Europe. For example there was a Greek single with “Nobody’s Child” on the flip side. Then there was the ‘Ya Ya’ EP release in Germany with 4 songs. Obviously, these are rare recordings. However, we did find some for sale on the second-hand market.

Background To The Original Song

Written in 1925, “Sweet Georgia Brown” by Kenneth Casey, this pop song spent five weeks at number in America one that year. That recording was of bandleader Ben Bernie and his Hotel Roosevelt Orchestra. However, the song resurfaced in 1949 when Brother Bones and His Shadows recorded it. In 1952, that song theme tune for the Harlem Globetrotters basketball team.

Such was the popularity of the song, there are a lot of cover versions available by many other artists, especially in America.

Tagged American standards, Brother Bones and His Shadows, Sweet Georgia Brown, The Beatles' hair, Ya Ya EP. Bookmark the permalink.