“Thank You Girl” is the B-side of the 1963 Beatles’ single, “From Me To You”, of course. Moreover, this single went to number one in a few countries including the UK and New Zealand. Obviously, with it being a single, it wasn’t on any album until the “Past Masters” came out in 1988.

7″ Single
Past Masters
Live At The BBC

The original idea was to release “Thank You Girl” as The Beatles’ third single. However, “From Me To You” won the right to be the A-side and the rest is history.

“We’d already written Thank You Girl as the follow-up to Please Please Me. This new number [From Me To You] was to be the A-side. 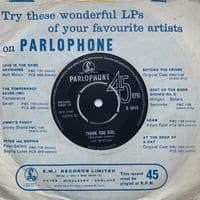 We were so pleased with it, we knew we just had to make it the a-side, Thank You Girl the A.”

By now, The Beatles had a massive fan base, mostly girls, of course. This song, with the original title of “Thank You, Little Girl”, was the band’s way to appease those fans and as Paul McCartney says:

“We knew that if we wrote a song called Thank You Girl that a lot of the girls who wrote us fan letters would take it as a genuine thank you. So a lot of our songs were directly addressed to the fans.”

The Beatles were crowd pleasers and knew how to excite the audience, but they could also address the fans personally through their songs as well.

“These early songs were wonderful to learn by and were good album fillers. [Thank You Girl] was pretty much co-written but there might have been a slight leaning towards me with the ‘thank you, girl’ thing, it sounds a bit like me, trying to appease the mob. A bit of a hack song really, but all good practice.”

The Beatles began recording “Thank You Girl” on the 5th March, 1963, in Studio 2 of the EMI Studios in London. During this 2.30pm-5pm session, they recorded 6 takes. On the 13th of March, further tweaks took place including John Lennon’s harmonica overdubs and drum fills from Ringo Starr.

Just to point out that on the 5th March, they also recorded “One After 909“. However, they re-recorded that song much later after disappointing results.

So, what do you think about this song? You can comment here and also in the massive Beatles Forum.