That’ll Be The Day

To begin with, this Beatles recording, “That’ll Be The Day”, marks a small piece of music history. Indeed, this was the first recording of The Quarrymen. As we know, The Quarrymen were The Beatles before they had a name change. So, basically, here we have the first Beatles record together with the flip side, “In Spite Of All The Danger“.

** Disputed date, some say the 12th or the 14th of July, 1958, but the true date is not clear. However, it is more likely to be early Autumn, 1958. This is because John “Duff” Lowe remembers the band members wearing scarves! But, unfortunately, there is no confirmation of an actual date for this recording despite those false dates floating around. 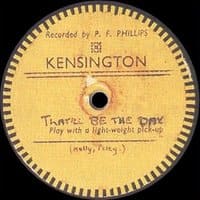 That’ll Be The Day

This historic 78rmp record which dates back to 1958 is a very valuable disc, of course. It is the Quarrymen, aka The Beatles, singing a cover version of a Buddy Holly song, “That’ll Be The Day”.

“John did That’ll Be The Day, which was one of our stage numbers, and George played the opening guitar notes and I harmonised with John singing lead.”

History shows that the band recorded this song in the studio of “Phillips Sound Recording Service”. In effect, this was the front room of Percy F Phillips’ home in Liverpool. Then, from the resulting tape recording, a 10-inch shellac disc came into being. Moreover, from this disc, about 50 copies came into existence which are a remaster of that original. Therefore, the original disc is one of the most valuable records in the world.

Be that as it may, “That’ll Be The Day” and “In Spite Of All The Danger” are now available on the Anthology 1 album. As well as that, their first commercial release of the first ever Lennon-McCartney song is there too. That is, of course, “You’ll Be Mine“.