The Ballad Of John And Yoko

“The Ballad Of John And Yoko” is a Beatles’ single release from 1969. Indeed, it was their last number one record in the UK. However, that did make it their 17th number one single! The song obviously charts the events surrounding John Lennon’s marriage to Yoko Ono. This song is the A-side while the B-side is “Old Brown Shoe”.

The Ballad Of John And Yoko

John Lennon, being the prolific songwriter he was, wrote the song in the days soon after his marriage with Yoko Ono in March 1969. The song would highlight their honeymoon activities, including their famous “Bed-In” at the Amsterdam Hilton Hotel.

Well, guess who wrote that? I wrote that in Paris on our honeymoon. It’s a piece of journalism. It’s a folk song. That’s why I called it The Ballad Of. 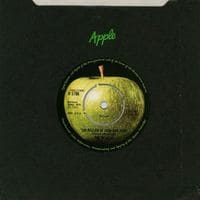 While undergoing an interview with The Rolling Stone magazine in 1970, John Lennon explains further:

“It was very romantic. It’s all in the song, The Ballad Of John And Yoko, if you want to know how it happened, it’s in there. Gibraltar was like a little sunny dream. I couldn’t find a white suit – I had sort if off-white corduroy trousers and a white jacket. Yoko had all white on.”

After Lennon returned from his honeymoon, he took his song to Paul McCartney because it needed finishing off. However, McCartney had a shock when he saw the lyrics.

There was a fear that “The Ballad Of John And Yoko” could open up old wounds. This is because within the song lyrics are references to Jesus Christ again, “Christ you know it ain’t easy”. Not only that but another line says, “They’re gonna crucify me”.

Although Paul McCartney had reservations about the use of some words, he decided to help Lennon get it right. During an interview, Yoko Ono later explained:

“Paul knew that people were being nasty to John, and he just wanted to make it well for him. Paul has a very brotherly side to him.”

McCartney explains a little further in his biography, “Many Years From Now”:

“John was in an impatient mood so I was happy to help. It’s quite a good song; it has always surprised me how with just the two of us on it, it ended up sounding like The Beatles.”

Alas, some radio stations in the UK and US banned the record while some just bleeped out the offending words. Be that as it may, the song got to number one in the UK. It also peaked at number one in many other countries, including Australia. But, the single only just managed to scrape into the American top ten.

At EMI’s Abbey Road Studios in London on the 14th April, 1969, The Beatles (Lennon and McCartney) began recording “The Ballad Of John And Yoko (They’re Gonna Crucify Me)”. That was the working title of the song, of course.

“I enjoyed working with John and Yoko on The Ballad Of John And Yoko. It was just the two of them with Paul. When you think about it, in a funny kind of way it was the beginning of their own label, and their own way of recording. It was hardly a Beatle track. It was a kind of thin end of the wedge, as far as they were concerned. John had already mentally left the group anyway, and I think that was just the beginning of it all.”

All in all, the band recorded eleven takes. However, take ten became the master for overdubbing etc. In fact, the final mix was complete by 11pm, an excellent result considering the recording session started at 2.30pm!