The Long And Winding Road

“The Long And Winding Road” is a Beatles’ song on their “Let It Be” album. However, by the time the album came out, The Beatles had already broke up. But, they had recorded most of the songs for the album – even before “Abbey Road” came out! There is also a very funny story behind the release of the “Let It Be” album, especially in reference to “The Long And Winding Road”. See below for that and in the meantime we will concentrate on the song itself.

Just to point out that there are two “main” versions of the song. Firstly, there is the one from the Beatles’ last studio album “Let It Be” where Phil Spector is the producer. Then there is the version on the “Let It Be… Naked” album which Paul McCartney likes much better. Be that as it may, the following details are for the 1970 album track.

The Long And Winding Road

Although a demo version was available during their “White Album” project in 1968, they never went back to it. However, when The Beatles broke up, John Lennon brought in Phil Spector to help with the “Get Back” project. This was behind the backs of both Paul McCartney and George Martin. Then, Phil Spector added his “Wall of Sound” effect to their dismay.

So, to the funny bit we spoke of earlier. Once Paul McCartney heard how savage Phil Spector had been to some of the tracks, he wasn’t very happy to say the least!

Indeed, after Paul heard the additions to ‘The Long And Winding Road’, he tried to prevent its release in this form. In fact, Paul McCartney wrote a letter to Allen Kline who, at the time, was business manager for The Beatles. So, here is that letter which is also in the Anthology book. 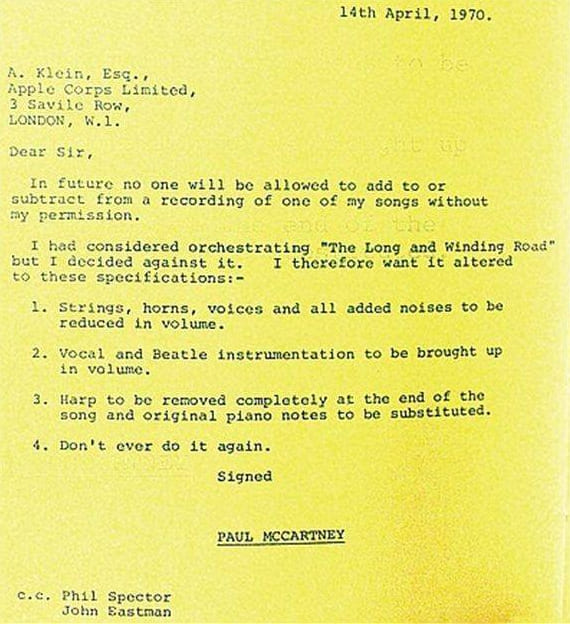 In case the letter is hard to see, we print it below.

In future no one will be allowed to add to or subtract from a recording of one of my songs without my permission.

I had considered orchestrating “The Long and Winding Road” but I decided against it. I therefore want it altered to these specifications:-

1. Strings, horns, voices and all added noises to be reduced in volume.

2. Vocal and Beatle instrumentation to be brought up in volume.

3. Harp to be removed completely at the end of song and original piano notes to be substituted.

Paul’s letter made no difference whatsoever, that is to say they released the “Let It Be” album without due regard. Not only that but Phil Spector’s response was pretty shocking. According to Something Else, here’s Spector’s reply:

“Paul had no problem picking up the Academy Award for the Let It Be movie soundtrack, nor did he have any problem in using my arrangement of the string and horn and choir parts when he performed it during 25 years of touring on his own. If Paul wants to get into a pissing contest about it, he’s got me mixed up with someone who gives a shit.”

How very dare Phil Spector talk about the King of Music in this way!

George Martin was also not too happy about the situation:

“That made me angry – and it made Paul even angrier, because neither he nor I knew about it till it had been done. It happened behind our backs because it was done when Allen Klein was running John. He’d organised Phil Spector and I think George and Ringo had gone along with it. They’d actually made an arrangement with EMI and said, ‘This is going to be our record.’

EMI came to me and said, ‘You made this record originally but we can’t have your name on it.’ I asked them why not and they said: ‘Well, you didn’t produce the final thing.’ I said, ‘I produced the original and what you should do is have a credit saying: “Produced by George Martin, over-produced by Phil Spector”.’ They didn’t think that was a good idea.”

Phil Spector messing around with The Beatles’ songs was a really bad thing indeed. However, that is now history. Paul McCartney made available an album correcting Spector’s “Wall of Sound”. Hence, we get the “Let It Be… Naked” …….. and a proper version of, “The Long And Winding Road” etc.

So, the choice is yours, Phil Spector’s version or Paul McCartney’s version. As a Beatles fan, the choice should be obvious!

Paul McCartney wrote the song in 1968 while he was at his property, High Park Farm, near Campbeltown in Scotland. This was during a period when The Beatles were showing signs of stress. Indeed, speculation about the break-up of the band were rife.

“Paul again. He had a little spurt just before we split. I think the shock of Yoko Ono and what was happening gave him a creative spurt including “Let It Be” and “Long And Winding Road”, ’cause that was the last gasp from him.”

Although not automatically obvious, “The Long And Winding Road” came about with because of the influence of Ray Charles.

“It doesn’t sound like him at all, because it’s me singing and I don’t sound anything like Ray, but sometimes you get a person in your mind, just for an attitude, just for a place to be, so that your mind is somewhere rather than nowhere, and you place it by thinking, Oh, I love that Ray Charles, and think, Well, what might he do then?

So that was in my mind, and would have probably had some bearing on the chord structure of it, which is slightly jazzy. I think I could attribute that to having Ray in my mind when I wrote that one.”