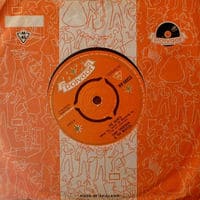 The Saints (B-side to My Bonnie)

** Because this recording is from 1961, Ringo Starr was not yet a band member.

When The Saints Go Marching In

The song’s origin is that of a Christian hymn going by the name of “When The Saints Go Marching In”. The Beatles version, shortened to “The Saints”, is in an upbeat rock and roll style.

After releasing “My Bonnie/The Saints” in Germany, that import became popular in their home town of Liverpool, England. Because of this, manager Brian Epstein ensured a British release of the single in 1962. The rock and roll version of “The Saints” is the B-side of the first commercial record release showing The Beatles as the artists. However, full credits went to “Tony Sheridan and The Beatles”.

The Beatles did record onto disc previously with “That’ll Be The Day“. But, that was when they had the name of The Quarrymen and it was not for commercial sale like this single.

“The Saints” didn’t end up on The Beatles’ Anthology 1 album like “My Bonnie”. So, the only was to hear it is via the single, YouTube or on other record labels.

While Tony Sheridan and The Beatles were playing at Hamburg’s Top Ten Club in June, 1961, German producer Bert Kaempfert, paid a visit. That resulted in the performers signing up to his company, Bert Kaempfert Productions.

On the 22nd June, in the Friedrich-Ebert-Halle, Hamburg, Germany, Kaempfert’s new signings recording sessions began. As well as “The Saints”, they recorded the A-side “My Bonnie” together with, “Why” and “Cry For A Shadow” which had the original title of “Beatle Bop”.

Tagged be, Bert Kaempfert Productions, The Saints, Tony Sheridan and The Beat Brothers, Top Ten Club, When the saints go marching in. Bookmark the permalink.