“Things We Said Today” is indeed the B-side to the Beatles’ single, “A Hard Day’s Night” from 1964. Obviously, the song is on the album of that name too. Furthermore, this record was one of the 17 other Beatles’ single releases that got to number one in the UK. After they released this song, they sang it live on their North American tour that year. However, it wasn’t part of their live repertoire for too long.

7″ Single
A Hard Day’s Night
Live At The BBC

Paul McCartney wrote “Things We Said Today” in May, 1964 while on holiday in the Virgin Islands. He was with his girlfriend, Jane Asher and Ringo Starr who was with Maureen, his future wife.

In fact, when writing the song, they were cruising in the Caribbean in a yacht which had the name “Happy Days”.

“I remember writing Things We Said Today in one of the cabins below deck one afternoon on my acoustic guitar.” 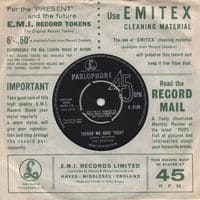 “I got away from the main party but it was a bit queasy downstairs; you could smell the oil and the boat was rocking a bit and I’m not the best sailor in the world, so I wrote a little bit of it downstairs and then the rest of it on the back deck where you couldn’t smell the engine. I don’t know why the engine was on, I suppose we were moving.”

The warm atmosphere and sunny climate has no reflection in the song. Paul was thinking of the future and that because of their chosen career paths, one day they may have to part.

“It was a slightly nostalgic thing already, a future nostalgia: we’ll remember the things we said today, sometime in the future, so the song projects itself into the future and then is nostalgic about the moment we’re living in now, which is quite a good trick. It has interesting chords.”

Even though McCartney and Asher had personal relationship problems, they did manage to stay together until July, 1968. As a matter of fact, they had an engagement ceremony in December, 1967!

The Beatles began recording “Things We Said Today” at the EMI Studios, London, on the 2nd June, 1964. The band only needed three takes to get it right. The first of those had a false start while the second was the rhythm track. The third take being their overdubbing tape which included the main vocals.

While take three included Ringo Starr’s tambourine playing and a piano piece by John Lennon, the final mix was to eliminate Lennon’s piano. However, due to leakage onto other microphones during the recording of the overdubs, the piano part got through somehow. There are some people who dispute this fact, but at this time, leakage is the only logical conclusion.

Obviously, most people with an interest in music know this Beatles’s song from the single release. However, The Beatles would often record shows for BBC Radio in their early days and they recorded this song twice for airing.

On the 14th of July, 1964, the band recorded the song for the BBC’s Top Gear programme for airing on the 16th. That recording is on the 1994 album, “Live At The BBC”. There is another version which they recorded on the 17th July for the BBC Radio show, “From Us To You” but this version is not commercially available yet.