“This Boy” is the B-side to The Beatles’ single, “I Want To Hold Your Hand”, in 1963, of course. However, in Canada the A-side was “All My Loving”. But, then again, there were differences like this in the early days, especially in North America. Be that as it may, the single was a number one record all over the world. Indeed, Beatlemania was now well and truly underway!

In the past, we heard The Beatles sing three-part harmony in songs such as “Three Cool Cats“. However, “This Boy” would see intricate three-way harmony vocals like never before with high, middle and low all clearly distinct. It’s a fine example of flawless harmonies in a Beatles’ song.

“Just my attempt at writing one of those three-part harmony Smokey Robinson songs. Nothing in the lyrics; just a sound and harmony.

There was a period when I thought I didn’t write melodies, that Paul wrote those and I just wrote straight, shouting rock ‘n’ roll. But of course, when I think of some of my own songs – “In My Life“, or some of the early stuff, “This Boy” – I was writing melody with the best of them.” 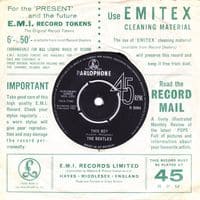 When writing this song, John Lennon attempted to capture the Motown sound of Smokey Robinson. In particular, Lennon wanted to emulate the style close to Robinson’s song “I’ve Been Good To You“. The connection is clear in that both songs have similar circular doo-wop chord changes, melody and arrangement.

We weren’t all rock ‘n’ roll, we could change the pace, which was always nice after you’d played for three hours. We wrote it in two-part harmony and then put the third part in for George to sing; we’d never actually tried to write something like that. Nice middle, John sang that great, then we’d go back into the close-harmony thing.”

On the 17th October, 1963 at the EMI Studios in London, The Beatles set about making a new single. This was to follow in the wake of their highly successful, “She Loves You” single. After the Fab Four finished the A-side, “I Want To Hold Your Hand”, they began to record “This Boy”.

In total, there were fifteen takes before overdubbing and mixing took place. To complete the final mix, they joined two of these takes together, this was around John Lennon’s middle eight section. Although the track had a rounded ending, they made a decision to fade the song out during a mixing session on the 21st October.

“This Boy” was the B-side to “I Want To Hold Your Hand”, but this was a Beatles’s single and was sure of success. In short, this single knocked “She Loves You” off the top spot. It also went to number one in many countries around the world.

The orchestral tune for this song appears in the movie, “A Hard Day’s Night“. This George Martin composition is the incidental music for the “towpath” scene where Ringo Starr wanders after he goes missing. Known as “Ringo’s Theme (This Boy)”, this tune also became a single which never charted in the UK.

The Anthology 1 version is from a live performance when The Beatles appeared on the British TV series, “Two of a Kind”. This programme was the forerunner of Morecambe and Wise, of course. There are also two incomplete takes from the EMI Studios on the 1995 single, “Free As A Bird“.