“Twist And Shout” is a famous cover song by The Beatles who made their own. Indeed it is the last song on their first studio album, “Please Please Me”. The song is also on their first EP too. In short, this was arguably The Fab Four at their rock and roll best.

This song was an original record release by The Top Notes in 1961. Then in 1962, The Isley Brothers had an attempt which allowed the trio to have an American top 20 hit. But, the best recording and performance of “Twist And Shout” was yet to come. Once The Beatles got hold of the song, they stamped their mark on it and the rest is history.

While The Beatles were touring Hamburg in 1962, they began to sing the song live at their gigs. Of course, Beatlemania would soon be in full swing and this song would become one of the favourites while touring.

In fact, this Beatles’ song is one of the finest examples of British rock ‘n’ roll ever due mainly to the vocal performance of John Lennon.

In November, 1963, at the The Royal Variety Show, Queen Elizabeth The Queen Mother was present while The Beatles sang the song. This version is available on the 1995 compilation album, “Anthology 1”. 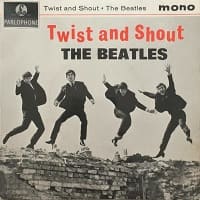 Everyone knew of The Fab Four’s humour and while on stage with royalty present, this came to the fore. Just before the band blasted out the song, John Lennon made an announcement:

“For our last number I’d like to ask your help. Would the people in the cheaper seats clap your hands, and the rest of you, if you’d just rattle your jewellery. Thank you, we’d like to sing a song called Twist And Shout.”

After the daring announcement, John Lennon shrank a little with one of his cheeky grins. However, there wasn’t anything to worry about. The audience laughed out loud while Queen Elizabeth The Queen Mother seemed to enjoy sharing in with the joke.

In fact, The Beatles only had 15 minutes left for their marathon recording session on the 11th February, 1963. George Martin knew the nature of the song would affect John Lennon’s voice so he ensured they recorded it last.

“I knew that Twist And Shout was a real larynx-tearer and I said, ‘We’re not going to record that until the very end of the day, because if we record it early on, you’re not going to have any voice left.’ So that was the last thing we did that night. We did two takes, and after that John didn’t have any voice left at all. It was good enough for the record, and it needed that linen-ripping sound.”

Just to point out that John Lennon was also suffering from a bad cold that day. The remarkable thing is that they recorded 10 songs on that day for this classic album.

“The last song nearly killed me. My voice wasn’t the same for a long time after; every time I swallowed it was like sandpaper. I was always bitterly ashamed of it, because I could sing it better than that; but now it doesn’t bother me. You can hear that I’m just a frantic guy doing his best.”

Because “Twist And Shout” is the name of The Beatles’ first British EP, we can chart its success. While the album, “Please Please Me” came out on the 22nd March, 1963, they released the EP on the 12th July, 1963. Both reached number one in the official charts. The former being top for 30 weeks while the EP managed to stay there for one week.

The LP spent 70 weeks in the UK charts while the EP was in the charts for 64 weeks. Also on the EP was, “A Taste Of Honey“, “Do You Want To Know A Secret” and “There’s A Place.”

In America, the song was on a single with “There’s a Place” on the B-side. However, it only reached number two in the US charts. This wasn’t bad when you consider that the top five positions then were Beatles’ songs!

Although the Beatles’ “Twist And Shout” song is a cover version itself, the following artists also covered the song: