We Can Work It Out

“We Can Work It Out” is part of a 1965 double A-side single from The Beatles. By now, of course, the Fab Four were massive and this single topped the charts in various countries around the world. Although the flip side of this track, “Day Tripper” was part of The Beatles’ live performances, they only used “We Can Work It Out” once on the road. Be that as it may, the commercial success of the record was phenomenal.

** Starr for the basic track but overdubbing of the stereo image by Harrison.

We Can Work It Out

“We Can Work It Out”, together with the flip side “Day Tripper”, were joint A-sides. This was the first occurrence in the UK of a single with two A-sides. 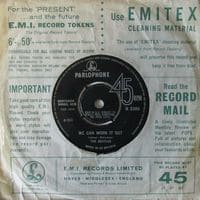 With Paul McCartney having relationship problems with his girlfriend, Jane Asher, the lyrics were almost certainly personal when he wrote them. However, he needed the help of John Lennon to finish the song off.

“I had the idea, the title, had a couple of verses and the basic idea for it, then I took it to John to finish it off and we wrote the middle together. Which is nice: ‘Life is very short. There’s no time for fussing and fighting, my friend.’ Then it was George Harrison’s idea to put the middle into waltz time, like a German waltz. That came on the session, it was one of the cases of the arrangement being done on the session.”

The two prolific songwriters worked hard to perfect the song. While Paul McCartney wrote about the problematic relationship with optimism, John Lennon, provided the contrasting pessimism.

“In We Can Work It Out, Paul did the first half, I did the middle eight. But you’ve got Paul writing, ‘We can work it out, we can work it out’ – real optimistic, y’know, and me impatient: ‘Life is very short and there’s no time for fussing and fighting, my friend.'”

We can also see this contrasting style in other songs such as “Getting Better” and “I’ve Got a Feeling“.

In the famous EMI Studios in London, on the 20th October, 1965, The Beatles recorded two takes of the rhythm track. This four hour rehearsing and recording session was around the time when the band were recording the fantastic Rubber Soul album. Indeed, the double A-side of “We Can Work It Out” and “Day Tripper” was to accompany Rubber Soul’s release.

The band spent around five hours overdubbing with other instruments that day which meant that this track had more attention than any other up to now. With a further two hours spent adding the vocals on the 29th October, this one song had a total of eleven hours studio time.

Long before MTV, The Beatles recorded many promotional videos. Indeed, this double A-side was their first promotional video of a single. This would save the band from making appearances on television shows such as Top of the Pops and Ready Steady Go! Not only that but they could now easily reach the international audience much easier.

This single release was in the latter part of 1965 and The Beatles were already living legends to so many people around the world. The record went to number one in many countries such as Australia, New Zealand, Canada and America. In the UK, the record spent five weeks at number one and was the band’s tenth consecutive chart topper.

At the time of release, the British press thought that after a couple of years dominating the charts, The Beatles popularity might diminish. After all, most bands would normally peak for a couple of years. This record shows that they were totally wrong, of course. Not only that, but The Beatles would remain extremely popular until they disbanded. Moreover, their legacy will last an eternity!