“Why” is a song worth an mention on The Beatles Forum and Cavern Club. This is because it was Tony Sheridan singing lead vocals while The Beatles were the backing musicians. However, at the time, they had the name of ‘The Beat Brothers’. Be that as it may, the song was the B-side to the instrumental, “Cry For A Shadow” which is on their “Anthology 1” album.

Indeed, “Why” was on a single in the UK, Canada and the US. However, in the US and Canada, they flipped the A & B sides. This was because the North Americans wanted the instrumental as side B. The song was also on an early EP in Germany first. 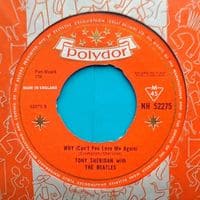 ** Because this recording comes from 1961, Ringo Starr was not yet one of The Beatles.

Tony Sheridan and Bill Crompton wrote the song and recorded it at the Friedrich-Ebert-Halle, Hamburg, Germany. The recording session on the 22nd June, 1961, also included songs such as “My Bonnie” and “The Saints“.

In 1964, they duly overdubbed further vocals and some handclaps to the original song. This updated track was for the single, of course, with “Why (Can’t You Love Me Again)” present on many labels. However, the original German EP has the first unadulterated recording.

Some people compare Tony Sheridan’s singing style on this song to be similar to Conway Twitty. After all, this was the early rock and roll era and many artists emulated their heroes.

So, what do you think of this song by The Beatles and Tony Sheridan?

Tagged Beatles - Why, Conway Twitty, Friedrich-Ebert-Halle, Tony Sheridan's singing style, Why, Why (Can't You Love Me Again). Bookmark the permalink.