“Words Of Love” is indeed a cover song by The Beatles from 1964. Indeed this was a minor success for the late, great songwriter, Buddy Holly. However, this Beatles’ version is on their album, “Beatles For Sale”.

In their early days, The Beatles would cover many songs written by other artists. Indeed, “Words Of Love” is one such track which Buddy Holly wrote in 1957.

In fact, The Beatles would play many Buddy Holly songs at their gigs too. For example, they sang, Peggy Sue, Maybe Baby, Everyday, It’s So Easy, Raining In My Heart and Think It Over. They also recorded, “That’ll Be The Day” and “ Crying, Waiting, Hoping“. 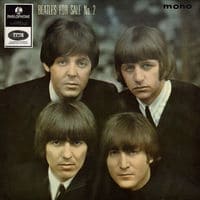 “Buddy Holly was completely different; he was out of Nashville, so that introduced us to the country music scene. I still like Buddy’s vocal style. And his writing. One of the main things about The Beatles is that we started out writing our own material. People these days take it for granted that you do, but nobody used to then. John and I started to write because of Buddy Holly. It was like, ‘Wow! He writes and is a musician'”.

Before The Beatles became the super group we know and love, they had to start somewhere. By playing songs from their heroes it gives us an insight as to who were influential to the Fab Four in their early days. “Words Of Love” is one of those songs which gives a positive link to the Buddy Holly influence, even if you never heard the original!

John Lennon sings the lower harmony while Paul McCartney, as usual, sings the higher harmony. Many people believe that they can hear George Harrison signing in harmony as well but it’s difficult to tell.

On the 18th of October, 1964, The Beatles recorded seven songs in nine hours such was the schedule those days. On this occasion the band were in a rush to finish the album, Beatles For Sale. “Words Of Love” was the last recording of the day which took only two takes and this even included the vocal overdubs!

Ringo Starr’s percussion equipment included his drum kit, or course. However, he also used a suitcase (packing case) which gives a more muffled sound on the bass.