This page refers to the “Yellow Submarine” song by The Beatles. Of course this song comes from the album of the same name in 1969. Not surprising then that it is the opening song on the album. But, the song was also on The Beatles’ album, “Revolver”, from 1966.

This track was also part of a double A-side single with “Eleanor Rigby”. Indeed, two incredible songs like this on a single were always going to go to number one.

When it comes to iconic songs, Yellow Submarine doesn’t exactly spring to mind now. However, go back to the sixties and this track was big. Its success probably comes from its simple sing-along lyrics that appealed to young and old alike.

In effect, this is a Marmite song in The Beatles’ catalogue, you either love it or hate it. Many Beatles’ fans think the band had to cater for all, while others thought it as a weak moment in their careers.

Yellow Submarine is a children’s song by Paul McCartney and from the Anthology he says:

“I remember lying in bed one night, in that moment before you’re falling asleep – that little twilight moment when a silly idea comes into your head – and thinking of Yellow Submarine: ‘We all live in a yellow submarine…'” 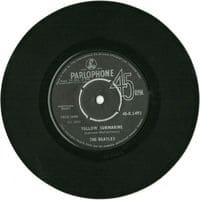 “I quite like children’s things; I like children’s minds and imagination. So it didn’t seem uncool to me to have a pretty surreal idea that was also a children’s idea. I thought also, with Ringo being so good with children – a knockabout uncle type – it might not be a bad idea for him to have a children’s song, rather than a very serious song. He wasn’t that keen on singing.”

The Beatles recorded the Yellow Submarine track on the 26th May, 1966, at the EMI Studios, London. After a few hours rehearsing, the band recorded four takes. Overdubbing with Ringo Starr’s vocals came a little later. Indeed, this song was going to have his trademark voice all over it.

Obviously the song needed a nautical atmosphere so they added sound effects on the 1st of June. Producer, George Martin, started out with Parlophone Records working with many comedy acts, therefore he was able to draw upon his vast experience with sound effects.

It must have been good fun in the recording studio as the team looted the place looking for suitable “instruments”. They used chains, whistles, wind, a thunderstorm machine and obviously a ship’s bell. But, they were to use a myriad of other items too.

To create a bubbling sound, John Lennon blew through a straw submerged in water. Both he and Paul McCartney talked into tin cans for the captain’s orders bit while Ringo Starr shouted like a sailor outside the studio doors “Cut the cable! Drop the cable!”

With this song being part of a double A-side single, it’s success was a certainly. After all, this was in the mid-sixties and The Beatles were massive, to say the least. So, together with the flip-side, “Eleanor Rigby”, this single topped the charts in many countries.

The popular single stayed on top of the UK charts for four weeks. Of course it went to number one in New Zealand and Australia too. Indeed the Aussies were crazy over The Beatles and could never get enough of them.

However, it only just made it to number two in the US Billboard 100 charts. John Lennon’s previous, “more popular than Jesus” quote could possibly be responsible for the drop in sales there. Be that as it may, the single did sell over 1,200,000 copies in the US!

There is a Yellow Submarine sculpture outside of Liverpool’s John Lennon Airport which has been there since 2005. The sculpture, built by apprentices from the Cammell Laird shipyard, is 51 feet long (16m). Its original use was for Liverpool’s International Garden Festival in 1984 but it’s good to see it in its final resting place.