This page provides information on The Beatles’ 1965 song, “Yes It Is”. Of course, this song is the B-side to “Ticket To Ride” which was a great success.

This song features three-part vocal harmonies with John Lennon, Paul McCartney and George Harrison all working pleasantly together. In fact, the harmonic motion is very rich, warm and detailed. We also see George Harrison’s effective use of the volume pedal guitar which is prominent throughout. 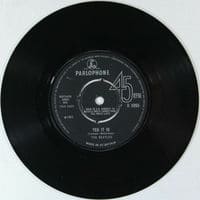 Documented in an interview with Playboy Magazine, John Lennon says that he tried to emulate the song style of “This Boy“. However, John admits that it “didn’t quite work”.

Paul McCartney was a little more upbeat about the song in Barry Miles’ Many Years From Now (McCartney’s official biography):

“I was there writing it with John, but it was his inspiration that I helped him finish off. Yes It Is is a very fine song of John’s, a ballad, unusual for John. He wrote some beautiful ballads but I’m known generally as the balladeer.”

In the Abbey Road Recording Studios, London, on the 16th February, 1965, it took 14 takes before perfecting things. That took around two hours but they needed to add the complicated vocals which took a further three hours. George Martin actually suggested that they sing their three-part harmony in the style of a barber shop quartet.

Because the A-side was “Ticket To Ride”, and that went to number one in many countries around the world, “Yes It Is” was a popular flip-side. However, unlike the A-side, this song didn’t appear in the film, Help! Be that as it may, the US version of this track says it was. Obviously this was an error. Incidentally, the American release shows the working title of the film instead, “Eight Arms to Hold You”!

Don Henley performed the song which is also available on “Bridge School Concerts, Volume 1”. While Billy Joel says that “Yes It Is” gave him the influence for his song, “Through The Long Night”, from 1980. British Comedian, Peter Sellers, recorded his version as a spoken parody available on “A Celebration of Sellers” (1993).