“Yesterday” is a Paul McCartney song but credited to Lennon-McCartney. The song goes back to 1965 but it is still as popular today than it was then. Indeed, it is one of the most covered songs in the music recording industry. This ballad is about a relationship break up together with some regrets.

According to the Guinness World Records, by January 1986, there were 1,600 cover versions of Yesterday. However, that number is still rising such is the influence and meaning of the timeless lyrics.

This song gives credit to John Lennon but that was just a commercial arrangement for all their works. However, John Lennon had nothing to do with the song at all. In fact, there was no other involvement from any of the other Beatles. Keeping it simple, and backed by a string quartet, Paul McCartney plays an Epiphone Texan steel-string acoustic guitar.

The song came about after Paul McCartney woke up one night in the home of his girlfriend, Jane Asher. He had been dreaming about the melody, so quickly went to the piano to play the tune. At the time, Paul wasn’t sure if he had subconsciously “stole” someone else’s music:

“I was living in a little flat at the top of a house and I had a piano by my bed. I woke up one morning with a tune in my head and I thought, ‘Hey, I don’t know this tune – or do I?’ It was like a jazz melody. My dad used to know a lot of old jazz tunes; I thought maybe I’d just remembered it from the past. 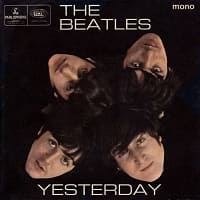 I went to the piano and found the chords to it, made sure I remembered it and then hawked it round to all my friends, asking what it was: ‘Do you know this? It’s a good little tune, but I couldn’t have written it because I dreamt it.'”

“For about a month I went round to people in the music business and asked them whether they had ever heard it before. Eventually it became like handing something in to the police. I thought if no one claimed it after a few weeks then I could have it.”

Paul persisted with the melody and became convinced that it was all his own work so began to write suitable lyrics for the tune. John Lennon and Paul McCartney would have working titles for certain songs and this song was no different. Paul gave it the working title of “Scrambled Eggs”.

Indeed, the opening line(s) of the new song was, “Scrambled eggs/Oh my baby how I love your legs/Not as much as I love scrambled eggs”. Obviously this was just something to keep the melody in place until Paul thought of better lyrics.

During a trip to Portugal in May, 1965 with Jane Asher, Paul eventually got a breakthrough with the lyrics to complete the song. What we finally got was a timeless classic, of course.

The song could have been far different to what we know now though. This is because Paul had thought about making Yesterday in a futuristic style! This would have saw the BBC Radiophonic Workshop, famous for the Dr Who theme, do an electronic version.

In Paul McCartney’s “official” biography, Many Years From Now by Barry Miles, he states:

“It occurred to me to have the BBC Radiophonic Workshop do the backing track to it and me just sing over an electronic quartet. I went down to see them… The woman who ran it was very nice and they had a little shed at the bottom of the garden where most of the work was done. I said, ‘I’m into this sort of stuff.’ I’d heard a lot about the BBC Radiophonic Workshop, we’d all heard a lot about it. It would have been very interesting to do, but I never followed it up.”

McCartney recorded this ballad on the 14th June, 1965, at Abbey Road studios, London. There were two takes with take two becoming the master. Paul’s recording began immediately after The Beatles recorded “I’m Down“.

There were vocal overdubs together with the overdubbing of the string quartet added on the 17th June. Although take two is the track most familiar to us, take one is on the Anthology 2 album. This version doesn’t have the string quartet overdub, of course.

Another point to note is that George Harrison was present during the recording of Yesterday. Although Harrison does not play in any part of this song, likewise any of The Beatles, you can find evidence of his presence on take one.

Of course, Yesterday appears on The Beatles’ album, Help! Because of this, they didn’t release it as a single in the UK at the time. Indeed, they hardly done this with album tracks. However, they did release an EP by the same name on the 4th March, 1966. This had three other tracks, “Act Naturally“, “You Like Me Too Much” and “It’s Only Love“.

In 1976, the UK finally saw the release of the song as an official single when it got to number 8 in the charts. This single featured “I Should Have Known Better” on the B-side.

The song was a single in many countries such as the USA, of course.

Without doubt, the song “Yesterday” is a classic of epic proportions. Indeed, the song has won so many awards and the ballad’s nostalgic, well-meaning simplicity has gave many artists reason to reproduce it in their own style. In fact, Matt Monro hit the UK top 10 with his version in March 1966.