You Can’t Do That

Firstly, “You Can’t Do That” is the B-side to The Beatles’ single, “Can’t Buy Me Love”. Indeed, the song was originally going to be the A-side for their new single. However, Paul McCartney wrote Can’t Buy Me Love shortly after and that was the better option.

You Can’t Do That

For the movie, “A Hard Day’s Night“, they filmed The Beatles singing “You Can’t Do That”. This was at the Scala Theatre, London with the rest of the concert sequence, of course. But this song didn’t make it in to the film. However, that clip is available in the documentary – “The Making of A Hard Day’s Night”.

The release of this sixth Beatles’ single gave us two brilliant songs, of course. The Fab Four would typically sing this at their live gigs, such was the popularity of the song.

George Harrison gave us both the guitar intro and outro on this track in his own style. He explained to Tom Petty from the Rolling Stone publication about his contribution, “I was just standing there [in the studio] and thought, ‘I’ve got to do something!'”.

When The Beatles appeared on The Ed Sullivan Show, George Harrison got a surprise gift. This was a $900 Rickenbacker 360 Deluxe electric 12-string guitar. 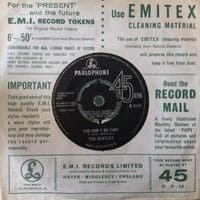 There was only one other in existence and you can hear its distinctive chiming sound on this song.

“You Can’t Do That” is a fantastic rock song which The Beatles would sing regularly. Indeed, they sang it many times while appearing on BBC Radio shows such as the Saturday Club. Moreover, they would sing this song after “Twist And Shout” on their successful Australian and North American tours.

This was an early Beatles’ song which they recorded at the EMI Studios, London, on the 25th February, 1964. The band completed four whole takes from the nine that they recorded. On the Anthology 1 album they include take six which has guide vocals from John Lennon.

This B-side, together with its A-side of “Can’t Buy Me Love”, became The Beatles’ fourth number one single in the UK.

So, what are your opinions on this song? You can comment here on this post at The Cavern Club or in the main Beatles Forum, of course.