You Know My Name (Look Up The Number)

You Know My Name (Look Up The Number) 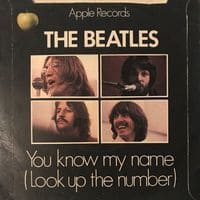 The Beatles experimented with many different music styles since the heady days of Beatlemania. This multi-segmented track, with its roots in 1967, is a comedy number with a touch of music hall to boot. However, there is no doubt that there is some similarities to Monty Python which shines through as well.

The problem we have with a reference to Monty Python is those TV programmes were not available until 1969. However, George Martin had a massive connection to British comedians working with many of them intensely after he took control of the Parlophone record label.

Of course, the individual Beatles rubbed shoulders with The Pythons from time to time. So, just maybe the Pythonesque sound was evolving and added as an afterthought when The Beatles went back to look at the track in April, 1969.

“You Know My Name (Look Up The Number)” came about when John Lennon got an idea while at Paul McCartney’s home.

“That was a piece of unfinished music that I turned into a comedy record with Paul. I was waiting for him in his house, and I saw the phone book was on the piano with ‘You know the name, look up the number.’ That was like a logo, and I just changed it.”

John Lennon
All We Are Saying, David Sheff.

While the track may appear slightly unconventional, it does get the approval from Paul McCartney:

“People are only just discovering things like ‘You Know My Name (Look Up the Number)’ – probably my favourite Beatles’ track! It’s so insane. All the memories … I mean, what would you do if a guy like John Lennon turned up at the studio and said, ‘I’ve got a new song’. I said, ‘What’s the words?’ and he replied ‘You know my name look up the number’. I asked, ‘What’s the rest of it?’ ‘No, no other words, those are the words. And I want to do it like a mantra!'”

So, unless Paul was only joking, this is his favourite Beatles’ track! Obviously The Beatles had a little fun while they were experimenting with something as surreal as this.

After the beginning which sounds so similar to “Baby You’re A Rich Man“, the song goes into a nightclub type atmosphere.

Denis O’Bell is obviously a play on Denis O’Dell who was an associate producer on the film, “A Hard Day’s Night“. As for the reference to Slaggers, well that could easily open to any interpretation, of course!

Although there were many takes on three days between May and June, 1967, the band shelved this song for a couple of years. However, on the 30th April, 1969, John Lennon and Paul McCartney added more vocals and sound effects. This included silly voices and other strange sounds such as Mal Evans digging around gravel with a spade which Paul McCartney found very funny.

In the UK, this track became part of The Beatles’ last single while the band performed together as a group (B-side to Let It Be). To all intents and purposes, the band were already a spent force by then. It’s not that they ran out of ideas, on the contrary, far from it. The Beatles were just not getting on together any more.

“You Know My Name (Look Up The Number)” shows the humorous side of The Beatles, of course. Be that as it may, it does help mark the end of an era. Since this was the B-side, could we actually say it was The Beatles’ last song?

You may leave a comment here or join in with the debate about this song in the Fab Four Forum.