To begin with, in 1965, there was a TV cartoon series featuring The Beatles. Every one of the 18 minute cartoons had a title which was also the name of a Beatles’ song. The song then pops up at sometime during the TV show. Furthermore, each show revolved around the lyrics to the song. 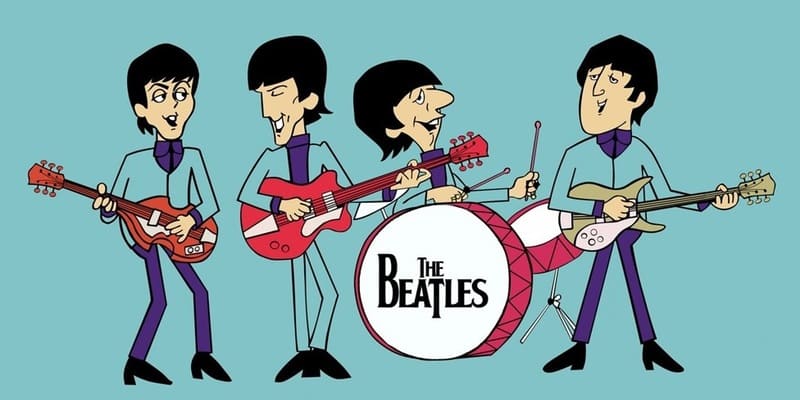 The Beatles become cartoon characters in this show

Although the making of The Beatles Cartoon Series was between the 25th September 1965 and 21st October 1967, the cartoon characters of the Fab Four never changed from their trademark ‘moptop’ image from the “A Hard Day’s Night” era.

Of course, as we know, The Beatles were masters of evolution. In other words, their image constantly changed as time moved on. Therefore, what The Beatles Cartoon Series gives us is a snapshot of the moptops from 1963/4 period. It becomes a little strange to see The Beatles as moptops while songs from 1967 play. For example, in season three ‘Penny Lane‘.

Of course, with The Beatles Cartoon Series beings animation, certain exaggerated characteristics were necessary. For example, John Lennon, the leader of the gang, has small eyes together with a large chin. Because he was the leader, he was pretty bossy and slightly aggressive with it.

On the other hand, Paul McCartney is a smart and stylish cool dude with a neat moptop. George Harrison comes over as that of someone who slouches both while sitting or walking. Ringo Starr gains sympathy for his overgrown moptop and rather large nose and goofiness.

The show would not be complete without their humour so there is plenty of that. However, we rarely see The Beatles’ manager, Brian Epstein.

Finally, The Beatles Forum and Cavern Club has prepared a pdf document which lists all the episodes. Furthermore, they give a little description about the individual shows. There are 6 pages of information which is too large to list here. However, by clicking the following link, you may take a look at it. Moreover, you can even download it free of charge to do with it as you please. If you have any problems viewing or downloading the document, get in touch and we will email it to you.

The Beatles Cartoon Series And Episodes

One Response to The Beatles Cartoon Series